Three flights later we arrived to Mumbai Airport at 4 am on July 4th, 2013. We took a taxi to where I had booked us a room in a shared apartment through Airbnb (a lot cheaper than a hotel). The apartment was owned by an Indian man and his mother; it was on the 15th floor, with no A/C. There were some breeze and ceiling fans but it definitely got hot. At least we had normal showers.

We found a nearby café that was pretty nice, where we had breakfast and lunch but though cheap, eating out added to the bills.

We didn’t come to India with a lot of money. In fact, less than expected because our landlord in the US decided not to return our $1500 deposit. It sucked because neither of us had ever done so much work to leave a house in such good shape.

(Update: He actually decided to pay $800 about a month later.)

The next day after our arrival we went to a The Leela, a very nice hotel, to meet with an Indian man whom we met in the US and had come to India just to help us get Indian phones and set up Josh’s company.

He was late, so we had lots of tea in the meantime. 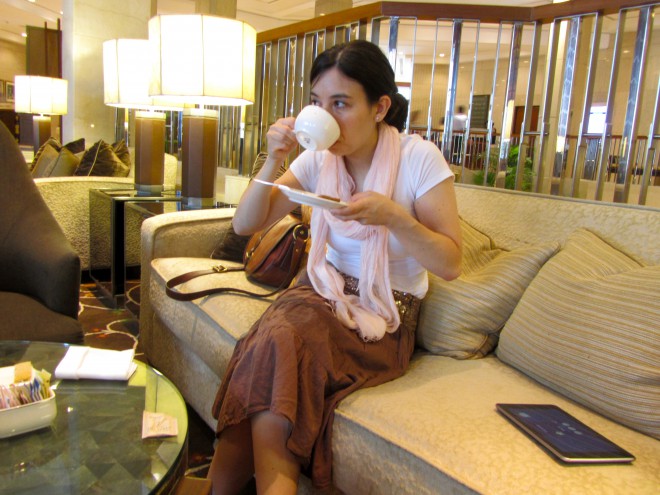 Later that day, we took a spontaneous driving tour of South Mumbai.

We stopped at Dhobi Ghat, called the world’s largest outdoor laundry is where the washers, locally known as Dhobis, work in the open to wash the clothes from Mumbai’s hotels and hospitals.

We drove by Victoria Station.

Then, we stopped at Colaba to see the typical Taj Mahal Palace Hotel and the Gateway of India.

And found a cool Starbucks where you have to go through a metal detector to enter.

Another day we spent it at a nearby mall. We were just going to the movies but the one we chose was sold out, so we chose another one that started 3 hours later. We were surprised by how nice the mall was, and later we were told that it is not that nice compared to the other ones.

During the three hours, we had drinks at the Rainforest Café.

I bought my first Indian outfit.

And Josh got a Thai foot massage.

We also bought a few groceries to get by.

We left Bombay on July 10th to drive 6 hrs to Ahmednagar.