In the last few days I have been driving by some tents with people making statues of Ganesh (The elephant Hindu God). Then I learned that Ganesh Chaturthi, a big Hindu Festival, is coming soon.

During Ganesh Chaturthi, the birth of Lord Ganesha (the son of Shiva and Parvati), is celebrated. This festival lasts 10 days, and begins on the fourth day of the waxing moon period, during the Hindu month: Bhaadra. These dates usually fall between August 19th and September 20th. This year, it begins on September 9th.

These Ganesh statue tents are setup about a 5 min walk from our house. I have been meaning to go take a look these past few days, and today, I finally did. I brought nothing with me but my little point-and-shoot camera. (Still in my wishlist: a DSLR. I digress…)

There were tons of painted Ganesh statues, arranged in rows. They were mostly white last time I drove by them, and today they were mostly colorfully painted. There were kids, women, and men around. And as I expected, the kids came running up to me and asked to be photographed, over and over. (To the point that it got a little bit annoying because they would try to get in front of the camera wherever I was pointing at.)

They were master photobombers. After many shots of the kids, I started telling them “nei nei” (no, no), when they got in front of the camera, but Indian kids don’t listen. I think the adults were telling them to back off when they saw I started to photograph around them. 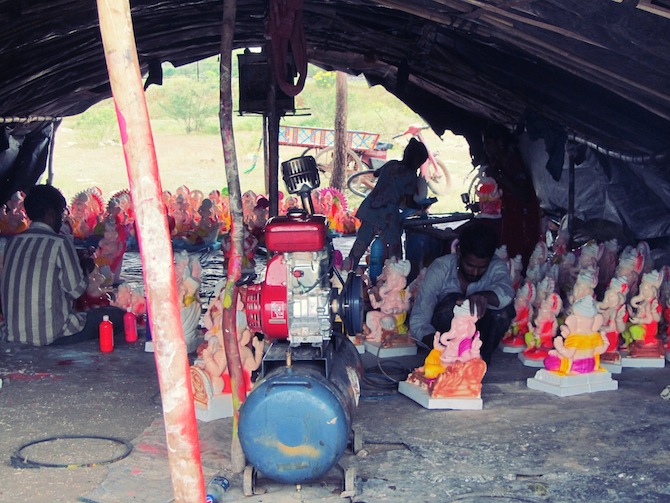 Then I walked into the tent and saw men and women painting these statues. One woman was trying to talk to me (in Hindi or Marathi, or both). She asked if I spoke Hindi (I think) and I responded: tori tori. Which means “a little”. Then she started talking and talking to me. I thought it’s funny how Indian women talk to me so much, even after knowing that I don’t speak Hindi or Marathi. This happens to me a lot. And it seemed like she was expecting answers from me, but I kept giving her the “I don’t understand” expression.

It was fun overall. I have no idea how long I was there, but enough for Josh to start getting worried and come over with the scooter to check on me. It was perfect timing because he arrived when I was taking my last shots and getting ready to go back.

I hope you enjoy the picture gallery. 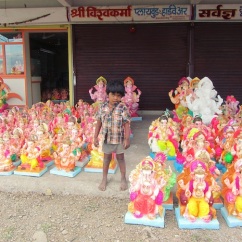 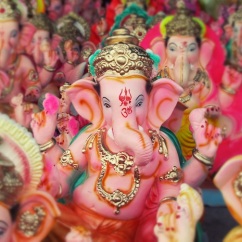 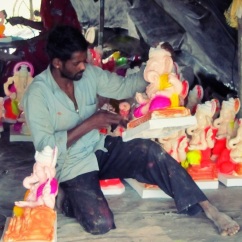 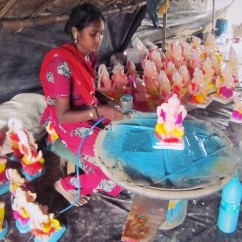 Painting ganesha statues for the festival. 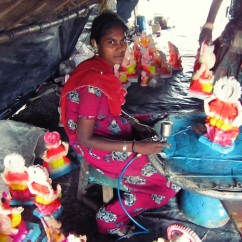 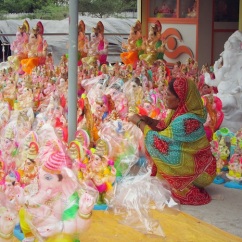 This woman is covering the statues with plastic for transportation. 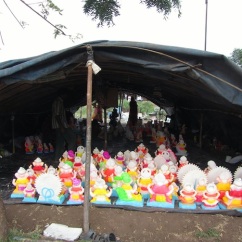 The tent from the back.

I don’t know why they become so serious when the get their picture taken.

This one is candid because I wanted to get her smiling.

The tent from the back.

2 thoughts on “Behind The Scenes: Statues for Ganesh Chaturthi (Hindu Festival)”