Last Sunday, I made two Indian recipes I had wanted to try: Mattar Paneer which is a north Indian dish of paneer (the most common type of cheese used in South Asian cuisines) and peas in a lightly sweet and spicy sauce. And saffron rice which is pretty self-explanatory.

I find Indian food complicated because of the number of ingredients needed. This recipe for mattar paneer, for example, calls for 9 different spices plus sugar, salt, and cornstarch, and the other main ingredients: tomatoes, paneer, and peas.

My attempt was a success.

I had fun and I was very happy with the result. The meal was delicious, and especially was a success because Josh loved it too, and he helped me by washing dishes afterwards! Washing dishes is my least favorite chore to do. I told him he made me as happy as having A/C in India. He agreed that was pretty happy.

This time I didn’t change the recipes much, like I usually do. 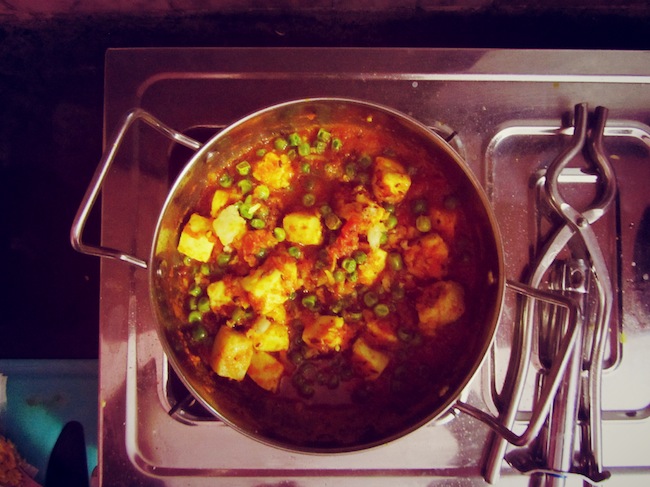 For the mattar paneer I followed this recipe. I had all but three ingredients: bay leaves, paprika and cornstarch, so I made it without them but there was plenty of flavor in the dish. Instead of cornstarch I used a bit of flour which helps with the thickening but it doesn’t provide the glossiness that cornstarch does.

And for the saffron rice I followed this simple recipe. I added toasted cashews in ghee as garnish which made the rice totally better, and I used groundnut (peanut) oil instead of extra virgin olive oil. Ghee would work great too. Extra virgin olive oil is best used raw, not for frying or boiling, in my opinion. Also olive oil is not very Indian and I was making an Indian meal. Olive oil saffron rice would work better for a Spanish meal.

For even more Indian flavor, cardamom, cloves, cinnamon, black pepper, and garlic can also be added when frying the onions.

When I was learning more about saffron, I found out that in India some sellers are selling fake saffron, especially to tourists. They use some kind of paper to make the strands and dye them with coloring or natural food coloring like beet juice.  Even though this is not a tourist town, with a little admitted paranoia, I decided to test the saffron I had bought a few weeks ago since it was quite cheap and the first time I used it, the flavor wasn’t there.

I tested it by soaking two strands in water for who knows how long, I didn’t check the time, maybe 20 minutes, and then rubbed the strands to see if they lost their color. They definitely did not, and the color in the water seemed to me like very authentic saffron color. It wasn’t fake! I couldn’t believe I can get saffron at that price: 1 gram for about $3 when half a gram goes for about $8 in the US, or more. It wasn’t the best quality for sure, so to get the flavor I just need to add more saffron than the recipe calls for, and when I made this saffron rice, I could definitely taste the saffron. Delicious!

6 thoughts on “I made mattar paneer and saffron rice”