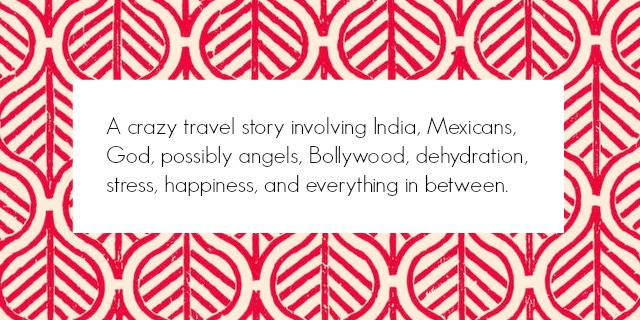 This happened in 2010, but my blog wasn’t alive then, and it is a personal, India-related story that I must tell.

On November 2010 I traveled with my mom and brother to India. I flew from the US, and they flew from Mexico. We met at our connections in Newark.

To get to our destination: Ahmednagar, we had to fly to Mumbai, and then take a 6-hour bumpy ride to Ahmednagar.

It was an interesting trip by itself, but the most interesting part was about 10 days later when I started my return. My family stayed in Ahmednagar for a longer trip, and I was to go back to the US by myself. The drive to the Mumbai airport that usually takes about 6 hours, took over 8 hours.

I had slept most of the time out of pure boredom with the air conditioning blasting during the whole trip and my sweater was still damp from hand washing it two days before.

I arrived at the international Mumbai airport about 1 hour before the flight. If you have ever been to the Mumbai airport, you know that 1 hour is not enough. They wouldn’t even let me check in. I was definitely too late.

To board an international flight in Mumbai you first have to be allowed into the airport, check-in, fill out a form and go through a weird customs line plus go through security twice: once after the “customs” and once right before boarding. So, with 1 hour before my flight, they wouldn’t allow me to start the long process. I think they even had started boarding already.

I had officially missed my first flight all by myself and I was in India. I had only a Mexican phone with roaming charges of million dollars, barely any money, and no driver anymore. I had never spent time in Mumbai except for a few hours and mostly at the airport, and never alone.

It was about midnight and the check-in people told me to wait at the office until the flight departed to get in contact with the airline and arrange a change. I went to this room where there were three people, including myself, who had missed their flight. As we were waiting, one of the guys there about my age made a phone call and started speaking in Spanish! And it was a familiar accent, not a Spain Spanish or an Argentinian Spanish. Since I could understand what he was saying, I learned that he was talking to his girlfriend and explaining that he missed his flight.

When he hung up the phone, I should’ve definitely said something to him. Anything. “Hey, I speak Spanish too.” “Hey, where are you from?” “Hey, this sucks huh?”… something. But I didn’t because I was stressed, a bit freaked out about what I was going to do all night and well, because I am shy and can’t easily just spark up a conversation with strangers.

But, literally, thank God he talked to me because he ended up being my savior. I don’t remember what he said to me first, but then I said, “I also speak Spanish”. Which must’ve been weird and kinda stalky since I had just listened to his conversation, and understood and didn’t talk to him first.

I learned that he was from Mexico City (where I’m from!) currently living and working in Canada and he was in Mumbai visiting his Mexican girlfriend who was studying film. I don’t think you realize what the odds of this were. I was a lost Mexican in a big city in India, and I had studied film at some point too.

I asked him if he knew of a cheap hotel nearby I could go to. He said he didn’t but to stick with him and maybe his girlfriend could help.

About an hour of waiting, an Indian woman from the airline finally came to the room.  She basically couldn’t do anything for us except give us a contact number. Great, thanks so much.

I had about 40 British pounds in my wallet from living in London 2 years ago. All this time I had carried it in my wallet and little did I know they would save me in Mumbai. I went to the currency exchange to change them to Indian rupees. The man at the counter questioned me why I was changing to rupees. Really? I missed my flight, will you please change these few pounds to rupees to save me from a crazy night and day to come?

This Mexican guy, whom strangely I can’t remember his name anymore, waited for me and then we finally left the airport to meet up with his girlfriend who had taken a rickshaw from her place about 15 minutes from the airport. I don’t remember her name either.

The guy introduced me to her and then she bought two 1 liter water bottles from a man who was selling them outside the airport. She bought one for herself and one for me. By now, about 1am, my mouth had never felt so dry in my life. The air conditioning during the long drive must have dehydrated me intensely. I truly had never felt my mouth like this, I almost found it hard to talk normally.

So again, thank God she bought me this water. It was needed.

I have a theory that one of the main reasons I missed my flight was God protecting me from serious danger, from severe dehydration. The flight I was going to take was a 16-hour flight, and I have never tried it, but flying for 16 hours already extremely dehydrated is probably not good, and probably hazardous to one’s health.

I asked her if she knew a cheap place where I could stay for the night.

Note: I wrote the whole story in one draft and it was too long for one post especially without photos; I did you a favor and chopped it in two. You will find out what happens next soon enough.