Last week I was in Acapulco, Mexico for 5 days during the Mexico Independence holiday and enjoyed every minute of it. I spent it mostly chilling and soaking in the sun (and the shadow) at the beach and poolside, and eating coconut ice cream. I also went out at night only once, which is less than usual since nightlife in Acapulco is a big deal.

Pretty much since I was born, I’ve been going to Acapulco at least once a year but this time it had been 5 years since I last went. It is kind of a tradition for my family to go to Acapulco for New Year’s and sometimes during spring break, summer, or Independence Day holiday. I haven’t been able to keep up with the tradition because of constant and some drastic changes that my life has been going through in the last 5 years. 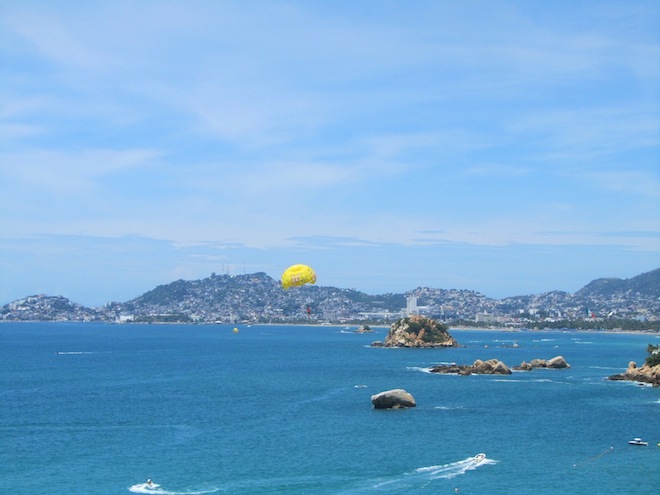 Acapulco is beloved amongst many chilangos (people from Mexico City.)  Usually, I always have friends going at the same time as me but this time not a single friend was there so I spent some quality time with mom. We were together for the whole duration of the trip and we didn’t even argue once. It probably helps that we haven’t been living together or even in the same country for years.

We enjoyed the sea, ate out, ate in, took walks, went to the movies twice and even to the casino to play some roulette. We also went to the nightclub Baby ‘O one night and had fun. This nightclub has been open since 1976!

We both love going to the movies and Mexican movie theaters are truly amazing; they are half the price than in the US and even better theaters. 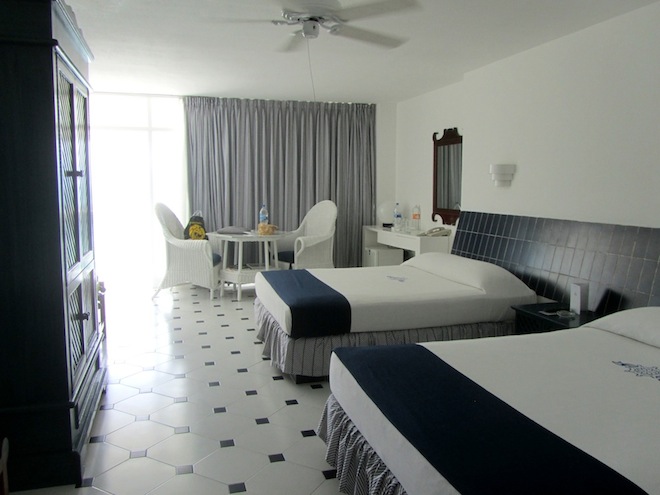 We usually rent an apartment, but even though both my brothers also came to Acapulco, they stayed separately with their friends. So my mom and I got a room on the 8th floor with a great view at the Elcano Hotel in la costera. The hotel’s blue and white color scheme, is perfectly suitable for the serenity quality of the ocean.

La costera refers to the side surrounding the Bay of Acapulco, rather than the long straight beach where lots of other hotels and the open ocean are. 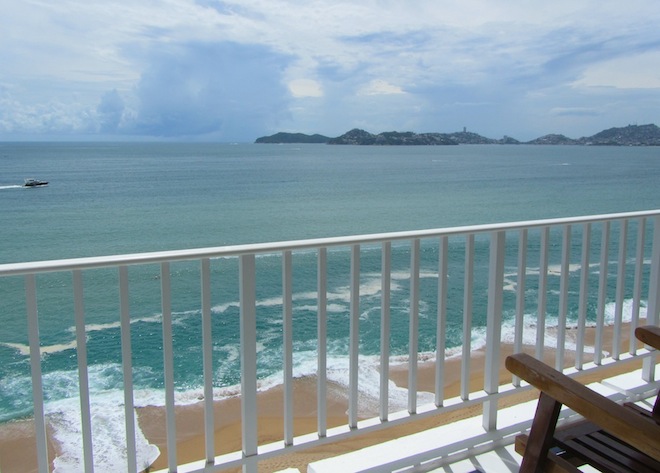 Above and below was the stunning view from the balcony of our hotel room. 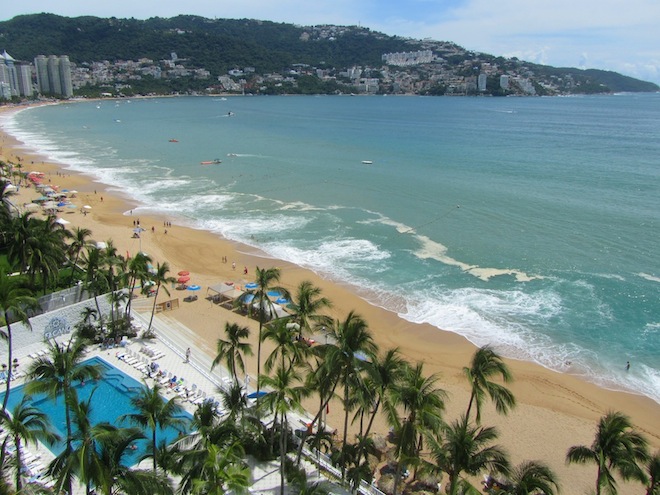 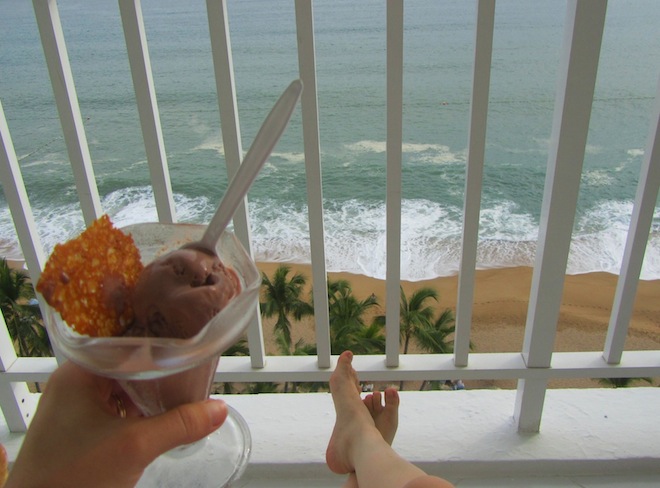 Whenever possible, we would hang out at the beach rather than the pool area. But for most of our stay the red flag for rough or dangerous seas was up in our hotel and the hotel staff wouldn’t allow us to be in the palapas area of the beach. But we somehow always managed to find a time spot when they would allow us to relax near the ocean.

A palapa (a Spanish word of Malayan origin, meaning “pulpous leaf”) is an open-sided dwelling with a thatched roof made of dried palm leaves. It is very useful in hot weather and, therefore, very common in Mexican beaches, such as in Acapulco. It is perhaps one of the most important architectural contributions of Philippine culture to Mexican West cultures.  (source)

In fact, one time we were in a palapa and when I went up to the room to get something and back, my mom and our stuff had been soaked from a wave that reached the wall which divides the beach and the pool area of the hotel. Hence, the blurriness in some of my photos which had sea water in the lens and eventually evaporated. 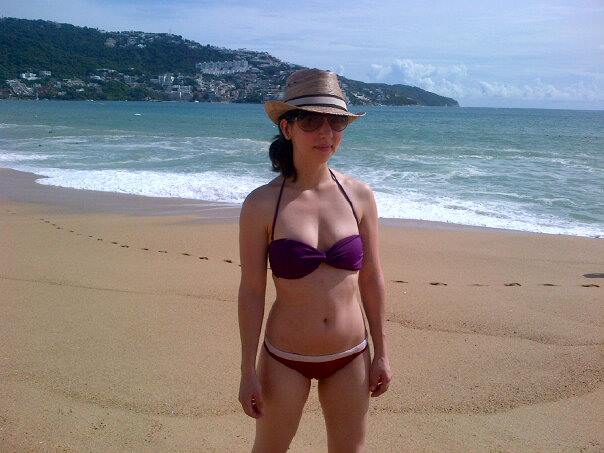 My mom loves the sea, she could live in it if she could. Like not by it, in it. She says she’s a mermaid, so she kept begging the hotel staff if she could go swim. Several times they let us just be at the edge of the waves but not get in the water. There was a lot of resaca, which is the undercurrent that flows beneath, usually independently of surface currents. This is when it gets dangerous because it doesn’t look dangerous.

There had even been some deaths a few hotels down where five people were on the edge, not in, and a wave pulled them away. They were able to rescue 3, but two died. 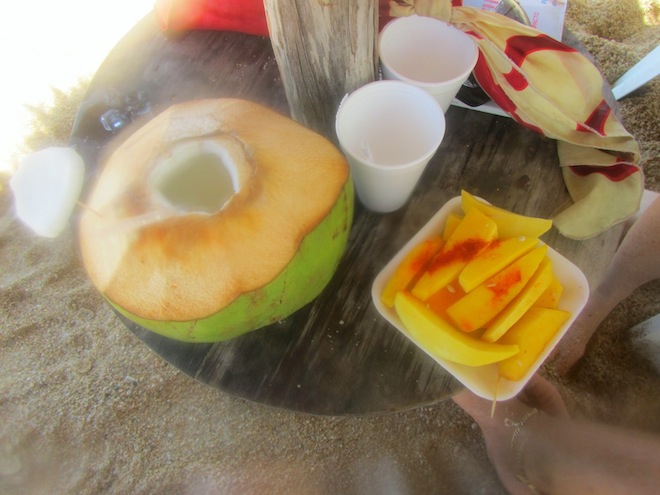 One of my favorite things about Mexico that I can’t get in the US is the tropical and delicious fruit availability, so I stuffed myself with mango (with chili and lime) and fresh coconut water. There are guys walking on the beach selling all kinds of things from clothes, to fresh cut fruit like the mango in the above picture. 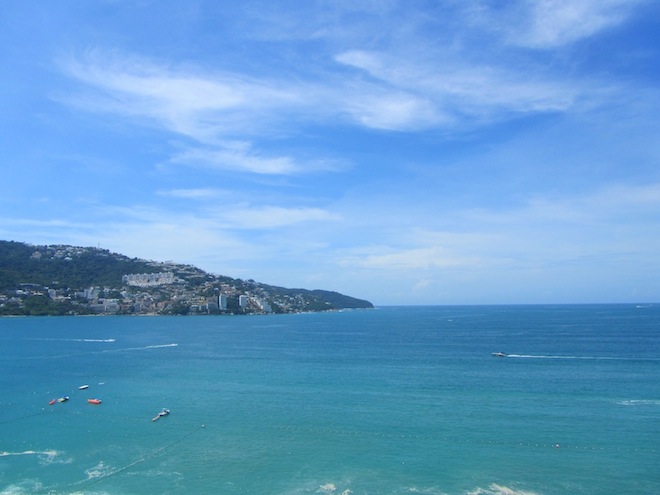 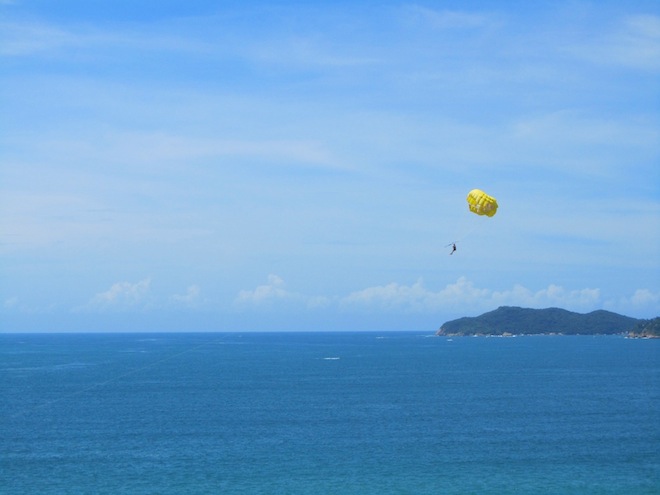 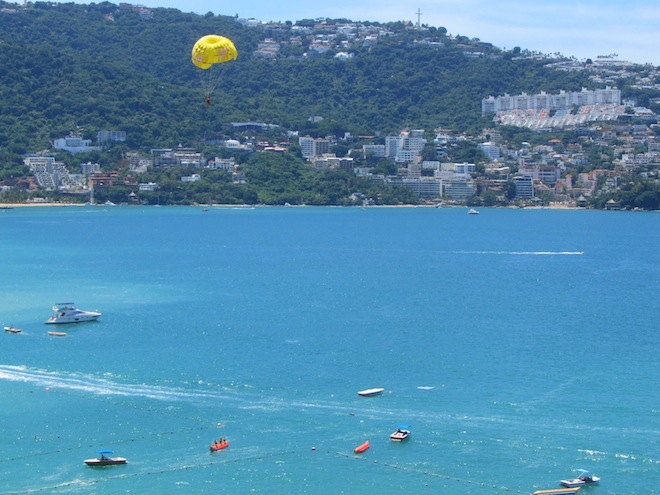 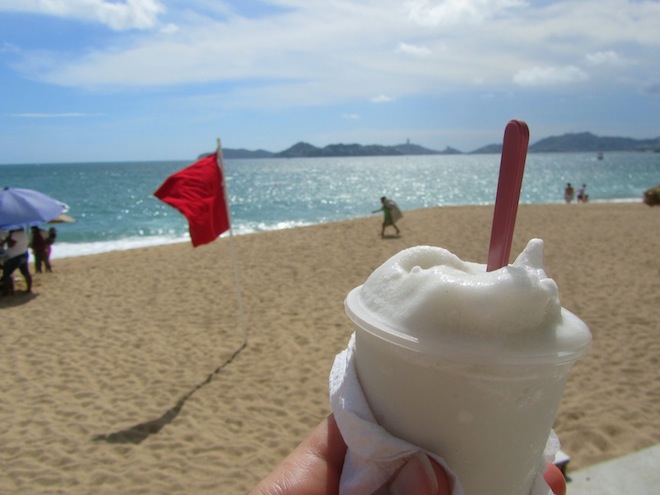 This was the other thing I stuffed myself with: fresh coconut ice cream. 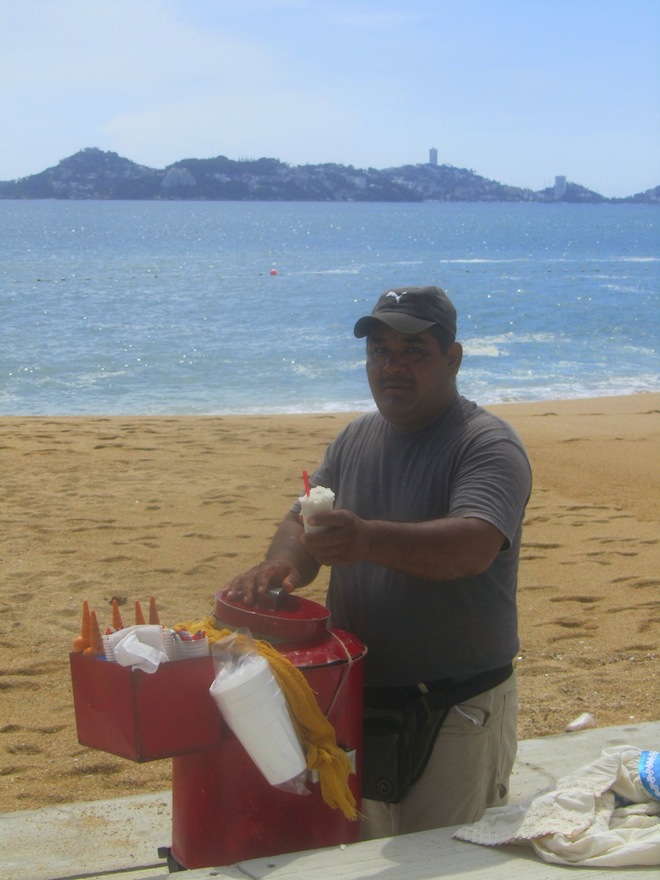 This man would come look for me every day because he knew I would by some. For 15 pesos (about a dollar) you get refreshing coconut deliciousness delivered to your hand while soaking in paradise. He always carries coconut, lime and tangerine flavours.

Mexico’s Independence Day is technically on the 16th of September but it is celebrated on the night of the 15th of September as that is when the Grito de Dolores occurred for the first time during midnight.

By the way, this is the big celebration holiday in Mexico, nobody really celebrates Cinco de Mayo down there. 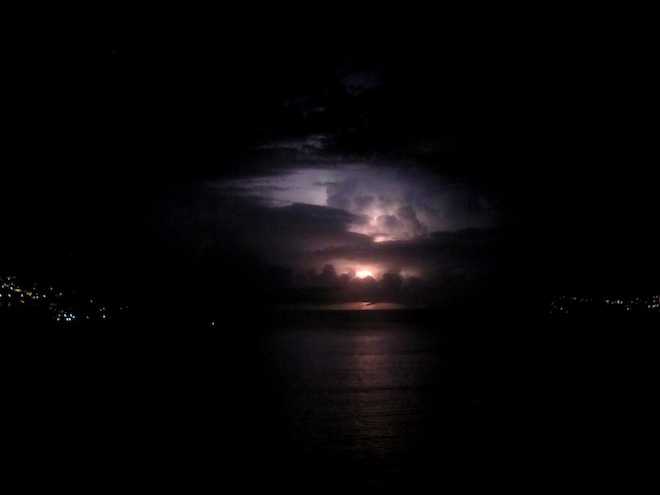 On the night of 15 de Septiembre, there was a lightning storm at sea around midnight. It was an incredible sight that my mom and I had never seen in Acapulco in all our lives. I took a video, but I wish I had my better camera with me which for some reason I did not bring to the trip. 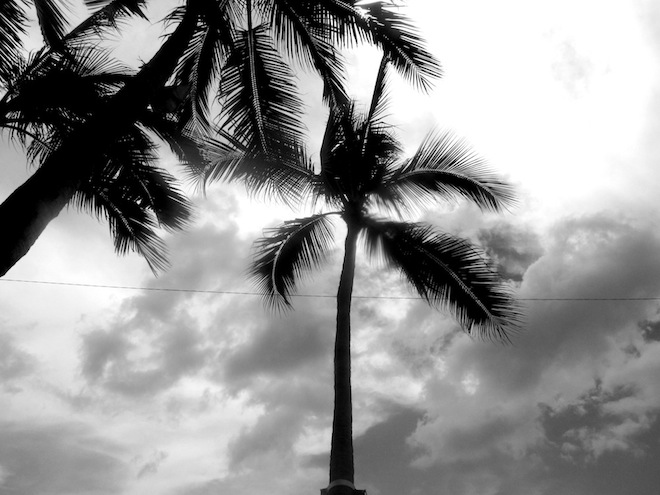 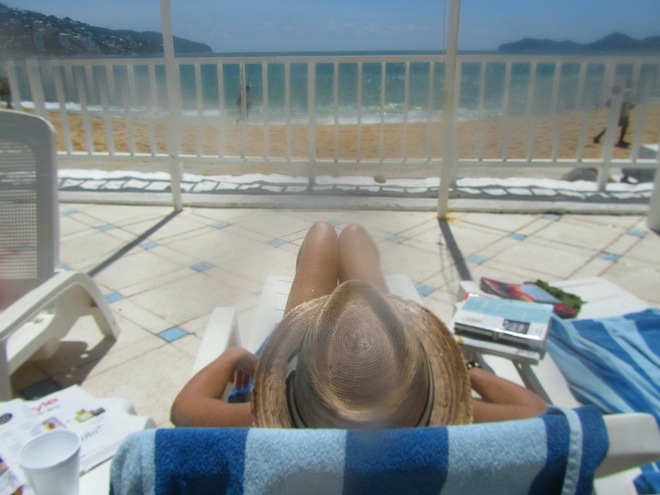 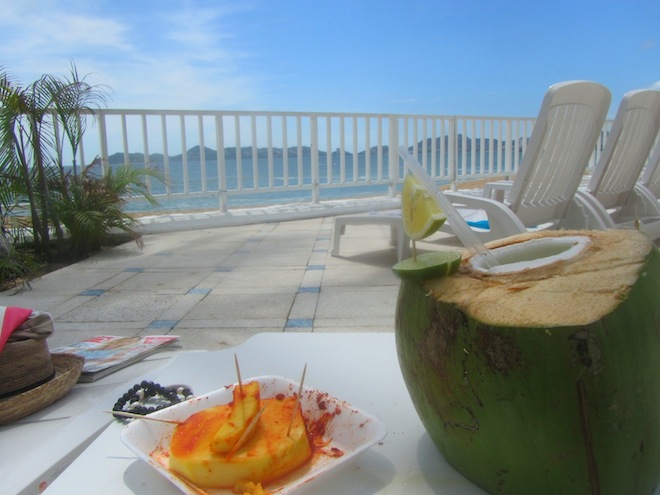 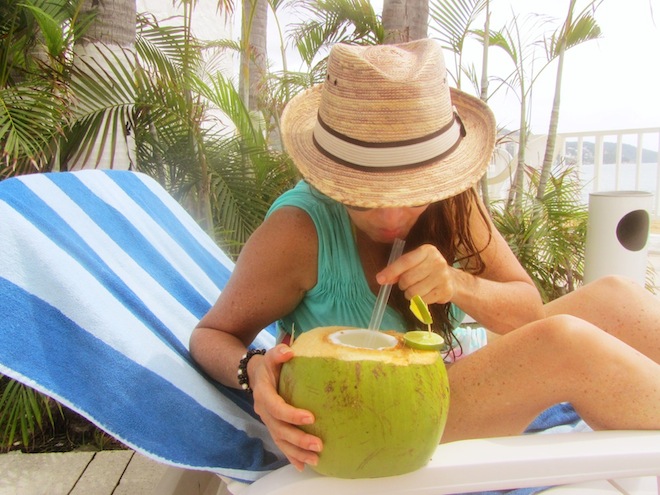 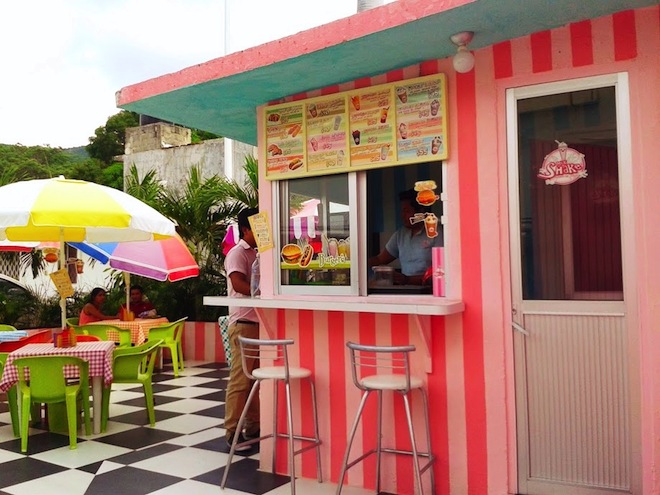 We found the most adorable place by accident. This colorful milkshake spot serves hot dogs and burgers as well. I wish they were in a better location so that people would know that they exist, because the place was truly awesome. 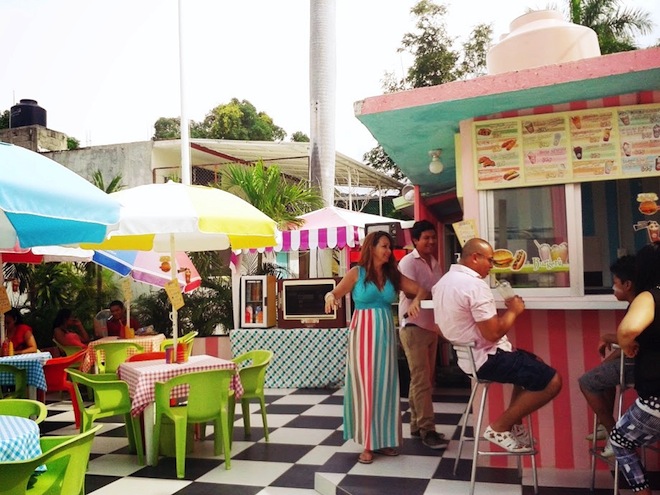 Acapulco wasn’t as full as it usually is during this holiday because lots of people cancelled their trip after hearing about the storm Odile. Luckily, it did not affect us except for rain on the day of our departure. 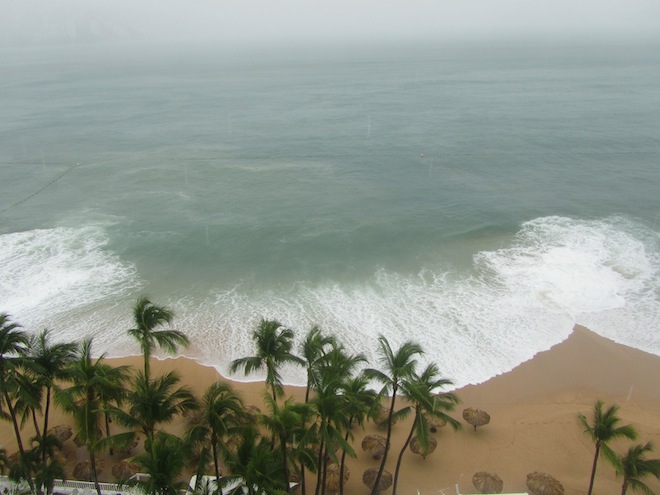 In the above picture you can see the palapas under and around the palm trees.

There was nobody at the beach this day. Also, because many had already left the day before to start work or school. 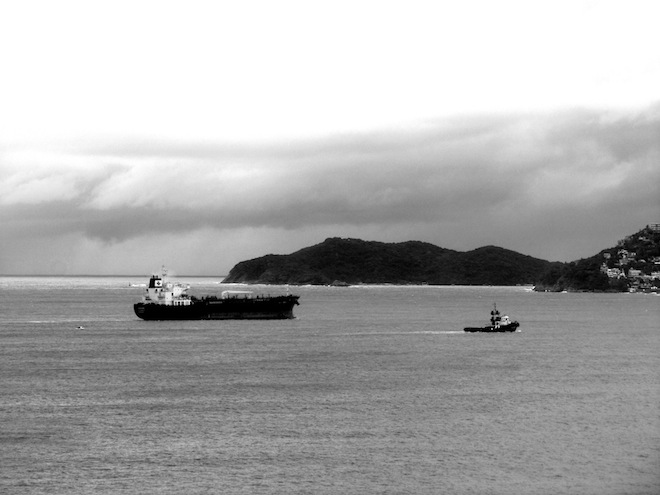 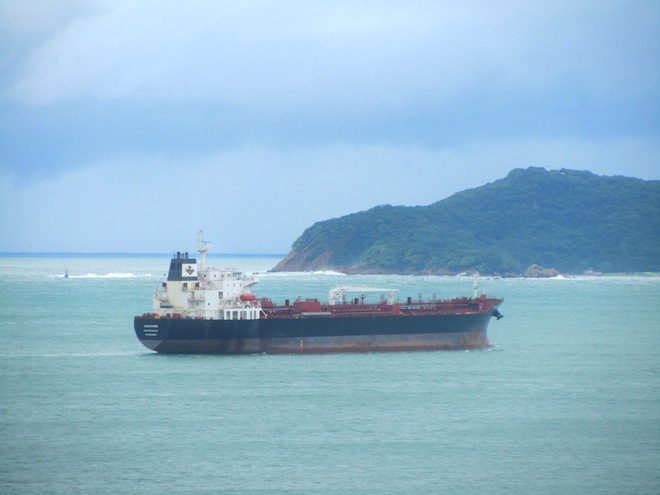 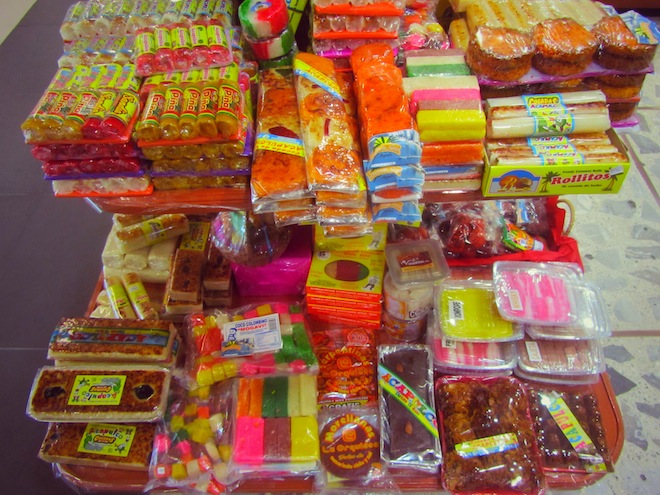 Have you ever been to Acapulco? What’s your favorite beach place?