The Abkhazi Garden was built with love by Prince and Princess Abkhazi since 1946. After living separate lives touched by both privilege and tragedy they married and settled in Victoria, BC.

From the streets, you can barely see the garden. You can only catch a glimpse of the beautiful natural landscape that lies behind the hedge. 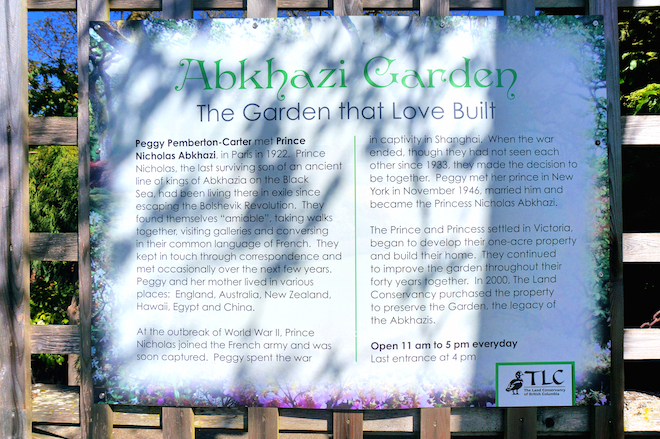 The following story about Marjorie Pemberton-Carter and Prince Nicholas Abkhazi was taken from The Land Conservancy website.

The story of the Abkhazis and their Garden really began in 1920s Paris when the young Marjorie (Peggy) Pemberton-Carter first met the exiled Georgian Prince Nicholas Abkhazi.  They established a strong friendship that was nurtured by correspondence and occasional meetings whenever Peggy visited Paris.

Their separate lives were filled with personal tragedy. Peggy was orphaned at age three, sent to live with uncaring relatives and adopted by a rich, childless couple.  After her adoptive father died, Peggy spent her early adulthood as the constant companion of her domineering adoptive mother, traveling the world but never putting down any roots.  It was only after her mother’s death in 1938 that Peggy was free to live as she chose; she settled in Shanghai, the city of her birth.

Nicholas fled the Bolshevik Revolution in Russia with his mother in 1919.  They settled in Paris and awaited reunion with Nicholas’ father, the hereditary ruling Prince of Abkhazia, in Georgia.

The Second World War saw both Nicholas and Peggy interned in prisoner of war camps: Nicholas in Germany and Peggy in a camp near Shanghai.

During her internment, at great risk to her personal safety, Peggy kept a secret diary of her war experiences that was published as A Curious Cage in 1981.  She also managed to keep hidden, in a container of talcum powder, a small quantity of travellers’ cheques that she used, upon her release, to purchase a passage to San Francisco. From there she would make her way to Victoria at the invitation of her closest friends, the Mackenzies, to recuperate and plan her next move.

Peggy arrived in Victoria in December 1945 and by March had decided to use the money from the sale of her property in Shanghai to buy the large treed and rocky lot that would soon become Abkhazi Garden.

By the fall of 1946 her land was fenced, the summerhouse was built, and lawns and fruit trees were planted.  In January of 1946, Peggy had received a letter from Nicholas.  They had lost contact with each other during the war and did not know that the other had even survived.

Nicholas proposed a meeting in New York, as he was planning to travel there in the fall.  Peggy agreed to meet him and their reunion, their first in 13 years, turned into an engagement.  The time was right for the two of them to be together.  They returned to Victoria and married in November 1946.

The Abkhazis had each led privileged lives in their early days.  Their tastes were refined and they shared a great appreciation for music, literature and art.  Their garden became the focus of their own artistic creativity.  They carefully chose plants that would enhance its natural beauty. For over 40 years the Abkhazis continued an intense process of experimentation and constant refinement.  Later in life Peggy would admit that “the garden became our child.” 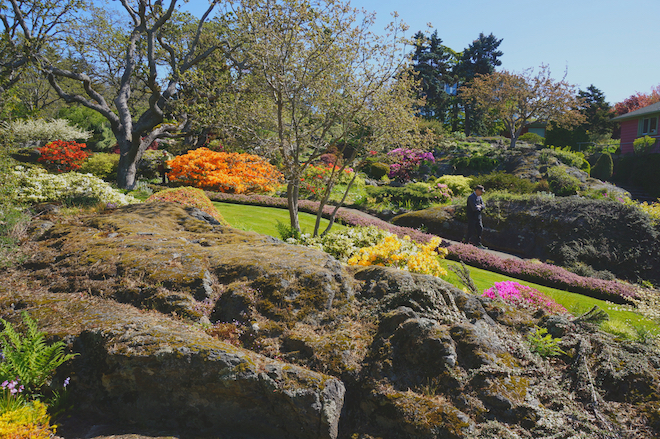 Nicholas died in 1987, and Peggy remained in their home for the next two years.  After she died in 1994, at age 92, the Garden changed hands a few times.

The garden also houses a wonderful Teahouse with views of the garden which specializes in Afternoon Tea and light lunches using seasonal and locally grown produce. We didn’t get a chance to enjoy this lovely place because we had plans to have tea at the Empress Hotel, but would love to next time.

The Teahouse is open daily from 11 a.m. to 5 p.m. with the last entrance and tea seating at 4 p.m. During the winter season (October 1 – March 31) the garden is closed on Mondays, Tuesdays, Good Friday, Thanksgiving, Christmas Day and New Year’s Day. 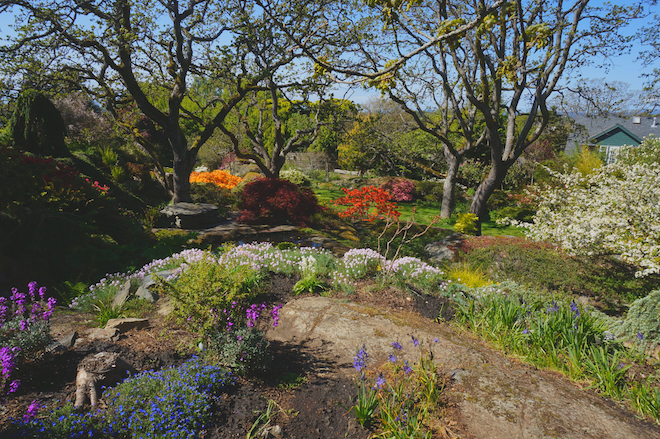 Admission is a suggested donation of $10 per person which is designated to TLCs operation and maintenance of the garden. Cash only.