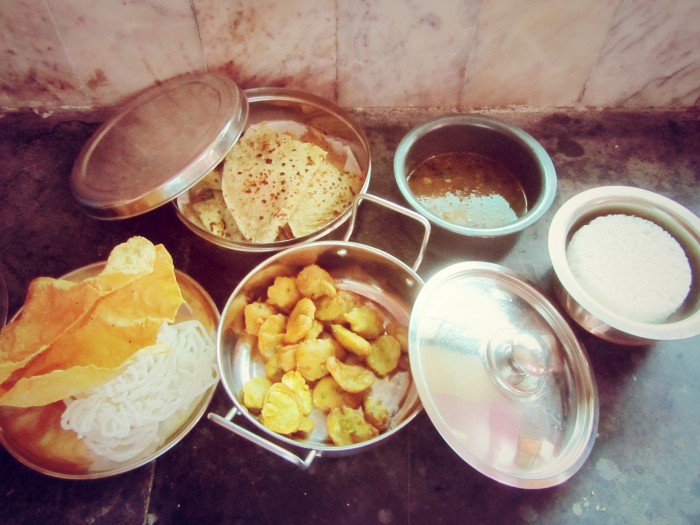 Today, our cook wasn’t supposed to come, but she arrived with her son around 4pm with a bag and a dabba, which is an Indian-style tiffin carrier, with several layered containers that come apart, each filled with different cooked foods.

I said “not today” in Hindi ( because I know very little), meaning she didn’t have to come cook today. But her son, who knows a little english, said “today is festival.” I asked which festival?, and he said “snakes.” I let the comment pass.

She started taking her container apart and putting every dish in different of my containers (so that she could take hers). She had brought us all these festival foods. She came to just drop it off and left after maybe 5 minutes. It was very sweet. It was another of those moments that make us like India.

There are so many festivals in India, apparently like 2 or 3 each month according to Adinath. Today is Nag Panchami.

This is what I just found on Google about Nag Panchami:

“This festival is all about the worship of snakes, which are especially dug out and gathered for the occasion. On the day of Nag Panchami, villagers dance to music and carry the snakes in pots on their heads in procession to the temple. After the rituals are complete, the snakes are taken out from the pots and the temple priest sprinkles haldi-kumkum (tumeric and red powder) and flowers on their raised heads. The snakes are offered plenty of milk and honey, then set free in the temple courtyard.

The surprising thing about Nag Panchami is that although the venomous fangs aren’t removed from the snakes, they’re not known to bite anyone. Special care is taken of the snakes in the lead up to the festival. They’re pampered with a diet of fresh milk and rats.

When: Nag Panchami takes places every year on the fifth day of the bright half of the Hindu month Shravan (July or August). You’ll be able to see more snake charmers than usual out on the streets of India during the festival.

If I had known about this in advance, I may have gone out of my way to go find villagers celebrating and take photos! Maybe next year.

We had Shekhar over for dinner to help us eat all this delicious food and we confirmed that we have an awesome cook. Josh and I had loved her cooking since the beginning, but we are not homemade-Indian-food experts.  So today, Shekhar tasted her food and said that she is really good. We also learned that she lives just like 3 minutes away from us.

6 thoughts on “A Food Gift From A Quirky Indian Festival”