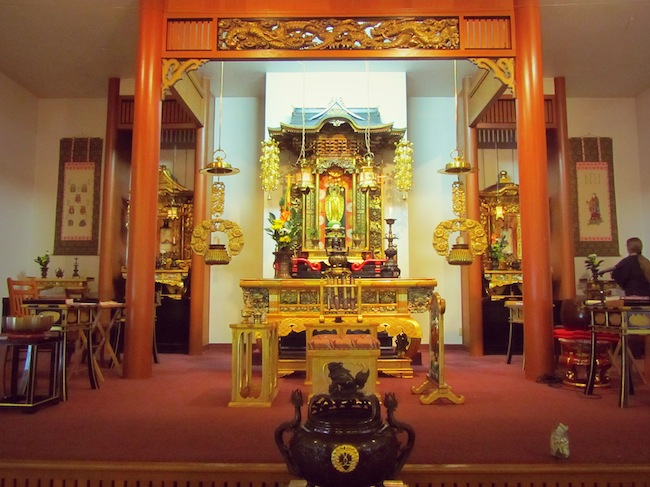 Our hosts here in Portland, Diane and Jason have been the greatest. We learned that Diane is Buddhist and she attends the Oregon Buddhist Temple. Yesterday she was going for the weekly 10am service, and we asked her if he could tag along.

On the way there she was explaining to us that they are very laid back there and to feel pressured to follow along or do the chants or anything like that. We didn’t feel like we did even before she said it, but then she said that if it was a different kind of Buddhism it would be a lot more different and strict. She also told us that over a 100 years ago when the Japanese came here to open this temple, they got a lot of influence from the nearby Baptist church so that they would fit in. So this Buddhist temple actually has pews like a normal church and the beautiful altar is all made in Japan. 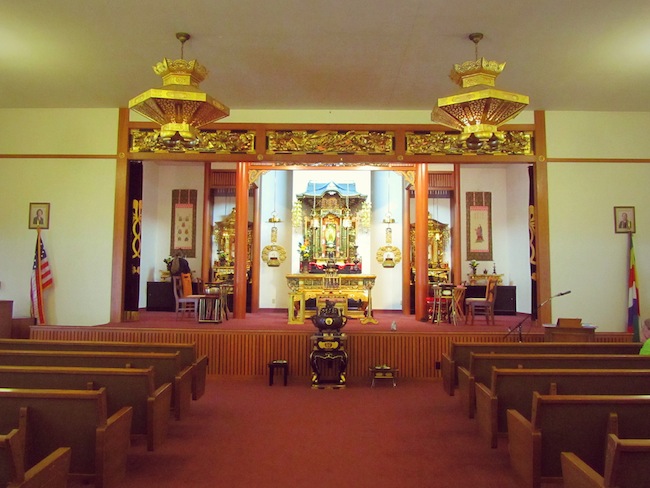 This was our first time attending a Buddhist service. It consisted of some bells ringing, some chanting, some “scripture” reading, some singing and organ playing, a “sermon”, announcements, and more music (I used quotes because I don’t know what terms they use). We were very surprised about the similarities of the format of the service to the service we used to attend in a Christian Methodist church in North Carolina, but the teachings of course are different.

We learned that there are many schools of Buddhism, which means that they all have the same teachings but they are offered in different ways and different ways to practice.

The Oregon Buddhist temple follows Jodo Shinshu (also known as Shin) Buddhism, a sect in the Pureland stream of Mahayana Buddhism. Shin was founded by Shinran Shonin (1173 – 1263 CE) in Japan during the Kamakura period. Today, Shin is the largest Buddhist sect in Japan with 10 schools and approximately 25 million adherents. Their head temple is Nishi Hongwanji in Kyoto Japan. (info from their website.)

In this temple, the dharma (teachings) are the following:

As Buddhists, we take refuge in The Three Treasures: the Buddha, the Dharma, and the Sangha. The second of these, the Dharma, refers to the teachings which illuminate our path.

The historical Buddha, Shakyamuni (565-486 BCE) taught that by freeing oneself from the suffering of life created by one’s own blind passions and illusions, one could attain Enlightenment, perfect peace. The Path to Enlightenment or the attainment of True and Real Life as expounded in the Jodo Shinshu (True Pure Land) sect of Buddhism is based on Shinran Shonin’s (1173-1263 CE) religious experience as the Way of Nembutsu. The Nembutsu Path therefore, is to become aware of the ignorant self and to rely upon the Infinite Wisdom and Compassion of Amida Buddha, which is expressed in sincere gratitude through the recitation of the Nembutsu, Namo Amida Butsu. 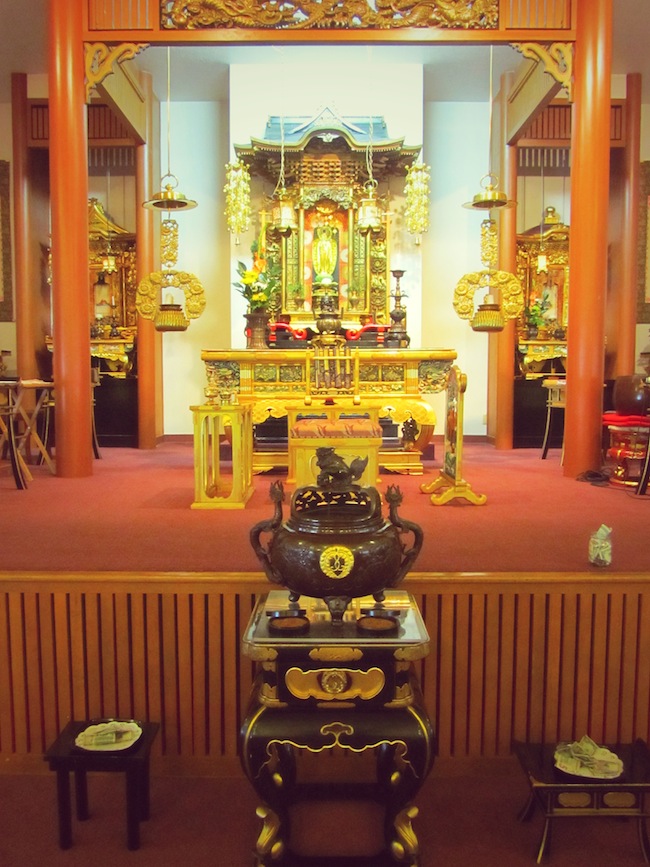 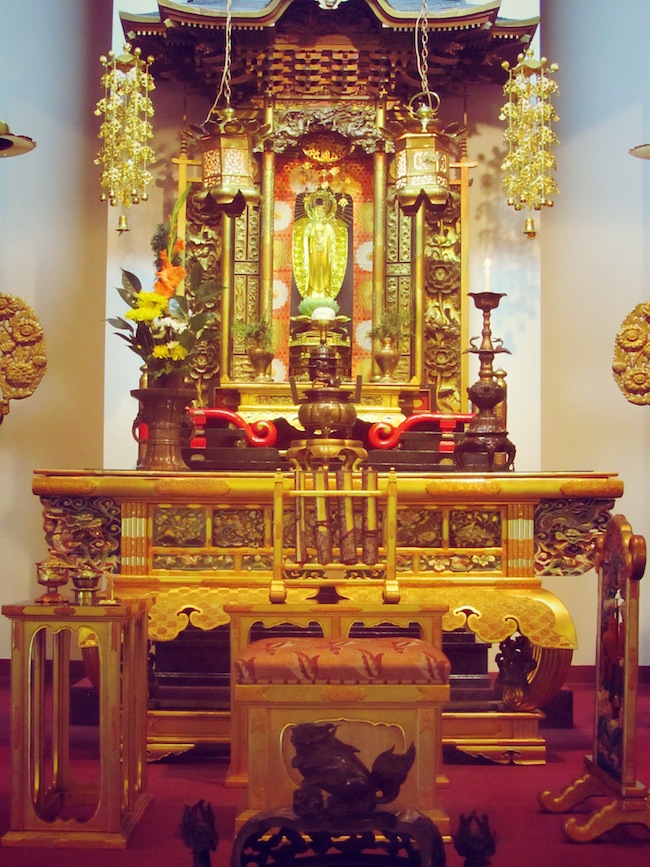 Diane wasn’t kidding about how laid back they are in this temple. There were laughs, there were children running around, and there was no dress code. We even saw a guy, who turned out to be a visitor, who came with his skateboard but did not have the appearance of a typical skateboarder.

At the end of the service a pot of burning incense was set in front of the altar and people would come offer incense by throwing it inside the pot and bowing down. We did so. 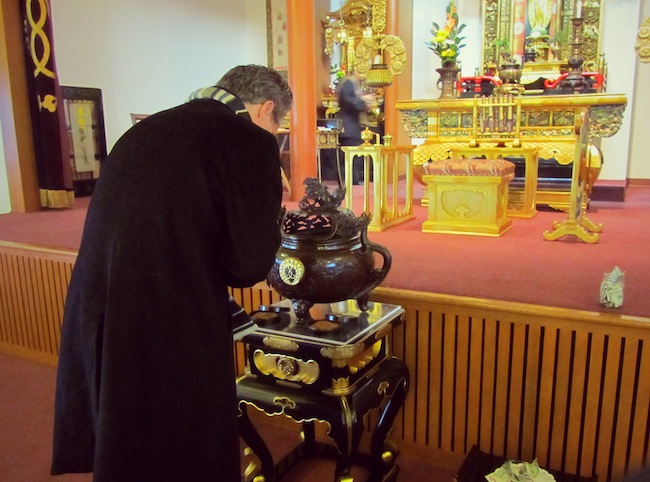 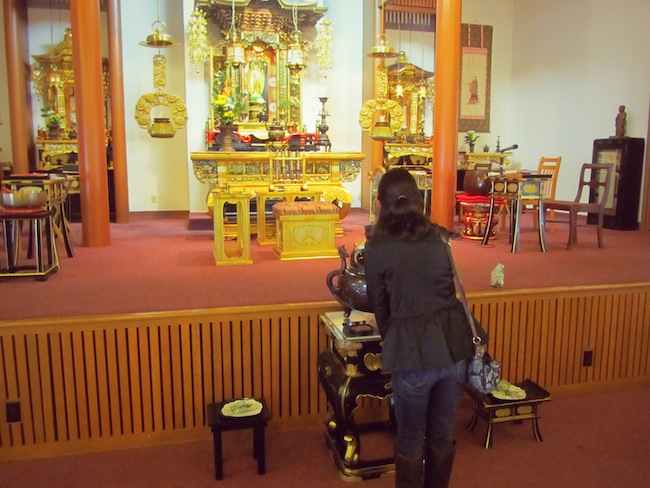 Every minister in the last 100 years or so has been a Japanese man except the last two, a woman and a white man.

Josh and I made an observation after our visit. About four days ago when we were in India, we would have never imagined that a few days later we were going to be attending a Buddhist service in Oregon.