Yesterday was the 3rd anniversary of our first wedding and this is the greeting card I bought my husband. It’s actually a birthday card (It says happy birthday inside); I didn’t like any of the ones in the Anniversary/Wedding section.

Yeah, we have been married twice already, to each other.

The first time was on November 23, 2010 in the courthouse of Durham, North Carolina. Just us two and two stranger witnesses we picked up 5min before the wedding. We had met two years before, and had been together for one year but it was always one of those soulmate relationships that we knew we were going to be together for a long time, so marriage was always in our plans. We just so happened to get married sooner than later because the US wanted to kick me out.

Basically, I had a 10 year tourist visa that allowed me to stay in the US for 6 months at a time. I was always in compliance but about three arrivals later, the immigration officer decided that I couldn’t keep doing this, and he gave me two weeks to leave the country and the next time I came back, it had to be with a different type of visa (e.g. student, employment.) Thanks a lot for the warm welcome into your country, officer, when all I do in your country is spend money.

There were a lot of tears involved after Josh picked me up at the airport and I told him the situation, because a different type of visa was not going to be an option and I simply did not want to leave Josh in two weeks and who knows when I would be able to come back. (Here’s the missing piece of the puzzle in the story: let’s just say that that my parents and Josh have a rocky relationship). Anyway, we ended up deciding that the best solution was to get married! This way I could apply for a green card.

So we went to Walmart to buy an engagement ring. Josh picked out a ring while I pretended to look at the accessories nearby.

It was a simple golden ring with a small diamond. Absolutely perfect for me. I wouldn’t want any other thousand dollar ring. I never take it off.

So in the next 2-3 weeks we got married and applied for a green card. It took a while to gather all the funds, and medical exams and paperwork required for the green card application, so I ended up overstaying my two weeks but in the end it worked out because, 6 months later, I got my green card. But guess what paid for my (approx. $1500 dollar) application? A car accident. While all this was happening, we got rear ended. I got hurt with a neck sprain, so the other driver’s insurance paid for my neck treatment and my green card application. We did not have the money at all during this time, so it was a total Godsend to us. Yes, I truly believe God set up the car accident so that we could pay for the application. Anyway, they did only give me a conditional 2 year green card (because it was through marriage) which means that after two years I had to apply to remove the conditional status (another $500), which I did 7 months ago and I am still waiting to hear from them.

Dear person who has always wanted to travel the world and fantasized about dating a foreigner and visiting exotic lands,

It’s all pretty awesome I have to admit, but if you stay put and date locals, you’ll never have to go through foreign bureaucracy which involves tons of stress, tears, years of waiting, months of waiting, unplanned outcomes, lots of money, plan Bs, plan Cs, lost relationships, and tough situations. But I guess in the end, it’s all worth it. I can say it is, with God given strength. – Mani

*Takes deep breath.* (I get exhausted just thinking about it all.)

On May 5th, 2012, we got married again. This time we had a small wedding (big compared to the first one) at a beautiful historic church right in Downtown Durham, funnily, right across the courthouse.

Josh likes to say: “my girl is so nice, I married her twice.” Silly.

We liked both our weddings. The first one, even though it was a courthouse wedding, we strongly felt God’s presence and he even showered us with a little bit of rain when we left the courthouse. We belive that God sometimes shows His blessings with rain (and even snow), whether it means that He approves, or that He is happy, or that He is there for us, it means something to us. In quite a few occasions, it has uplifted our hearts.

Our second wedding was great too, because it was truly a love wedding. Meaning that it wasn’t about the wedding itself, but about our love and God’s love and the love of the people present. Not one person attending was there because they felt they had to be there, and all of the people present had known us for no more than 3 years.

Normally, we would have had to pay for church fees, music fees, pastor fees, wedding director fees, but we did not pay a penny. (We are not religious by the way, but we had built a bond with the community of this church.) We planned to pay for all those fees, but in the end, every single service was offered to us at no cost, it was a transaction of love instead of greed. Even a few ladies teamed up to surprise us with a small reception after the ceremony with homemade food and drinks. God was simply not sending us any money to be able to pay for anything that we thought a normal wedding needed. We just paid for a wedding dress, for a couple simple flower arrangements, and for a few dozens of mini cupcakes from the local cupcake shop. That’s it. I think we spent a total of about $1500 dollars for a beautiful wedding. Did you know that the majority of US couples spend between $19,200 and $32,000, and an average of $25,700 dollars?

Oh, I almost forgot about another love moment. On our wedding night we were going to go back to our cat in our small apartment, not any fancy hotel or honeymoon. Before leaving, at the parking lot, I don’t know how it came up, but Annette, a woman who attended our wedding, told us that she had a voucher for a free night at the Washington Duke Inn and that we could have it. We were familiar with this hotel because we had been there a few times for drinks and for tea and it is really a beautiful hotel with a big golf club. In fact, if we had the money and had insisted on a pricier wedding, this would have been our choice for a wedding reception and for accommodation for out-of-town guests, which we ended up having just one, and he ended up being our photographer as well, another gift of love instead of greed!

So, we went to feed our cat, then had a few drinks with Justin (our only out-of-town guest/photographer/business partner/friend) and spent the night at the Washington Duke Inn.

I told you. It was a pure love wedding, I didn’t mean that in any corny possible way, it’s just what it was. And it was exactly what God wanted for us.

It rained even harder on the evening of our second wedding. 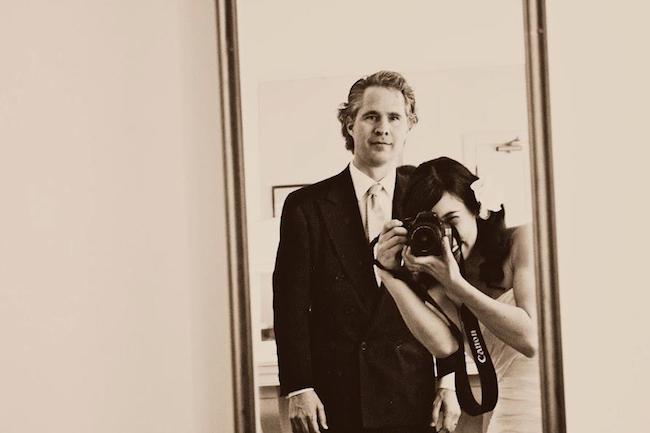 12 thoughts on “Pretty good so far… (Our Marriage Story)”