Feliz Día de los Muertos! The Day of the Dead is way cooler and more interesting than Halloween. Read on to learn about this ancient rooted and fascinating holiday.

The Day of the Dead is a two-day Mexican holiday that doesn’t celebrate death but those who were living. It occurs from October 31 – November 2 of each year.

Today’s Day of the Dead has a combination of both indigenous origins from the Aztec festival for Mictecacihuatl, The Lady of The Dead, and Catholic origins from the Spanish conquistadores’ All Saints and All Souls Day.

The Aztecs developed the ritual some 3,000 years ago because they believed one should not grieve the loss of a beloved ancestor who passed. Instead, the Aztecs celebrated their lives and welcomed the return of their spirits to the land of the living once a year. That’s where the food, drink and music offerings come in.

During the Spanish conquest, Catholic leaders exerted their influence on the tradition, and the resulting mash-up created the Day of the Dead celebration as we now know it.

In some regions, on October 31, All Hallows Eve, the children make a children’s altar to invite the angelitos (spirits of dead children) to come back for a visit.

November 1 is to honor and welcome the deceased children and infants. This day is referred as Día de los Inocentes (“Day of the Innocents”) which is technically the Hispanic April Fool’s Day, but also as Día de los Angelitos (“Day of the Little Angels”), and finally All Saints Day which is the more religious term coming from the Spanish Catholicism influence where there is a spiritual bond through prayer between those in Heaven and the living.

November 2 is Día de los muertos (Day of the Dead) or Día de Todos los Santos (All Souls Day) where those who died as adults are welcomed and honored and visited at their burial site.

This holiday is not to grieve death but to celebrate those who were living. This is a great example and wonderful, touching story of how the Day of the Dead helped a British gal with her dad’s death.

The holiday is packed with fiestas and celebrations with an all-around festive and joyful atmosphere.

Altars are setup to welcome the spirits of loved ones into the home. It is also practice to visit the cemetery and their graves to decorate them and to celebrate with picnics and music.

On top of the altar, offerings called the ofrenda are laid for the dead. Cigarettes, toys, tamales, sweets, and spirits (the alcoholic kind) are some things you might find on altars. The ofrenda consists of things that the deceased enjoyed while they were alive.

Some common things across altars include:

Candles – Candles are lit to welcome the spirits back to their altars.

Mexican Marigolds – These yellow-orange flowers, also called cempasúchitl are the traditional and iconic flower of this day. Their fragrance is supposed to help lead the dead back to their altars. Marigold petals are sometimes sprinkled on the floor in front of the altar, or even sprinkled along a path from the altar to the front door, so that the spirit finds their way.

Incense – Most commonly, copal incense, which is the dried aromatic resin from a tree native to Mexico. The scent is also said to guide the spirits back to their altars.

Salt – represents the continuance of life.

Photo of the deceased – A framed photo of the dead person to whom the altar is dedicated, usually positioned in a centered spot on the altar.

Pan de muerto – “Bread of the dead” is a delicious orange and anise flavored bread dusted with sugar which has strips on top that represent the bones of those who have passed away.

Sugar skulls – Called calaveritas de azúcar (little sugar skulls) are symbols of death and the afterlife. Sugar skulls are also given as gifts to the living during Day of the Dead.

Foods – Traditional Day of the Dead foods that you would find on altars include atole, mole, tamales, and tortillas. Altars also usually include the dead person’s favorite foods, including modern foods like Fruit Loops and potato chips!

Water – Souls are thirsty after their long journey from the Other Side, so they appreciate a glass of water upon arrival.

What’s up with all the skulls?

Skulls are everywhere during Día de los Muertos. The origins trace back to the pre-Hispanic era, when they were kept as trophies and used during rituals.

The modern day Catrina is said to have come from the Aztecs worship to the Mictecacihuatl, The Lady of The Dead who is Queen of Mictlan, the underworld, ruling over the afterlife with Mictlantecuhtli, another deity who is her husband. Her role is to watch over the bones of the dead and preside over the ancient festivals of the dead.

La Calavera Catrina  is a 1910–1913 zinc etching by famous Mexican artist José Guadalupe Posada. The image depicts a female skeleton dressed only in a hat befitting the upper class outfit of a European of her time. Her chapeau en attende is related to French and European styles of the early 20th century. She is offered as a satirical portrait of those Mexican natives who, Posada felt, were aspiring to adopt European aristocratic traditions in the pre-revolutionary era. She in particular has become an icon of the Mexican Día de Muertos, or Day of the Dead. (source)

Make your own Pan de Muerto! 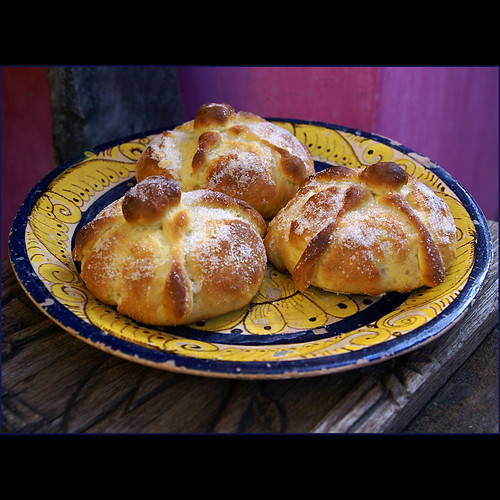 Ingredients:
• 1/2 cup butter
• 1/2 cup milk
• .1/2 cup water
• 5 to 5-1/2 cups flour
• 2 packages dry yeast
• Rind of one large orange
• 1 teaspoon salt
• 1 tablespoon whole anise seed
• 1/2 cup sugar
• 4 eggs
In a saucepan over medium flame, heat the butter, milk and water until very warm but not boiling. Meanwhile, take 1-1/2 cups flour and set the rest to the side. In a large mixing bowl, combine the 1-1/2 cups flour, yeast, salt, orange rind, anise seed and sugar. Beat in the warm liquid until well combined. Add the eggs and mix in one more cup of flour. Continue mixing more flour until dough is soft and not sticky at all. Knead over floured surface for ten minutes until smooth and elastic (you can use your mixer with the dough attachment).

Place dough in a lightly greased bowl, cover with plastic wrap and let rise in a warm place until doubled the size ( 1-1/2 hours), punch the dough down and shape into round loaves, making long strips of dough top create “bones” and place them around the loaves to decorate, make a round ball do adorn the top of the bread, let these loaves rise covered with some kitchen rags for 1 hour.

Bake in a preheated 350° oven for 40 minutes. Remove from oven and sprinkle or dunk them in a bowl of sugar immediately. (If they cool down, sugar will not stick to the bread).
Serve with Mexican Hot Chocolate.