Craigdarroch Castle is a Victorian experience and a good example of the massive houses built for entrepreneurs who became wealthy during the industrial age. In this case, it was coal baron Robert Dunsmuir, a Scottish immigrant who made his fortune from Vancouver Island coal.

The immense fortune of the Dunsmuir family is reflected in the four floors of intricate stained glass windows, complex woodwork and luxurious Victorian-era furnishings.

The Castle gives visitors a glimpse of privileged life in the 1890s. 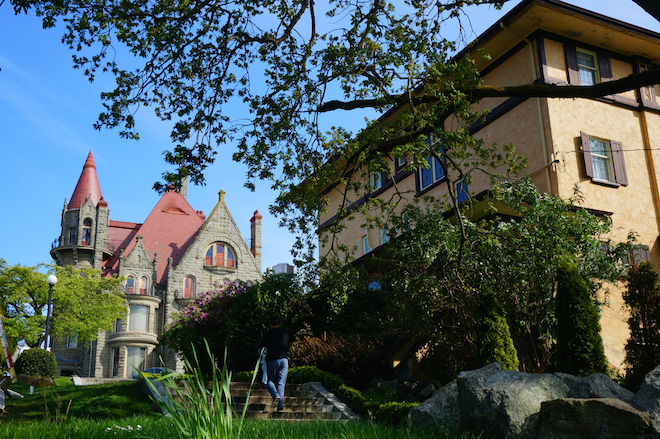 Robert built this home and castle between 1887 and 1890 during the reign of Queen Victoria and is now a National Historic Site. He died in 1889 before its completion.

After Robert’s death, Joan spent some time travelling in Europe. Her two sons managed the completion of the construction while she was in Europe and Joan, with three of her eight daughters and two orphaned grandchildren, moved back to the castle in 1890.

Robert’s death brought conflicts to the family. Contrary to oral promises made to his sons, he left his entire Estate to his wife, Joan. This was a blow to both James and Alex (then in their thirties) who had worked in the family business all their lives. It took seven years of negotiations with Joan before she would give her sons title to their San Francisco company.

After three more years and a settlement, Alex Dunsmuir felt confident with his financial future to marry Josephine, a divorced woman that he had been living with for about twenty years. Their married life only lasted six weeks as Alex passed away on January 31, 1900 while they were in New York on their honeymoon. How tragic is that? 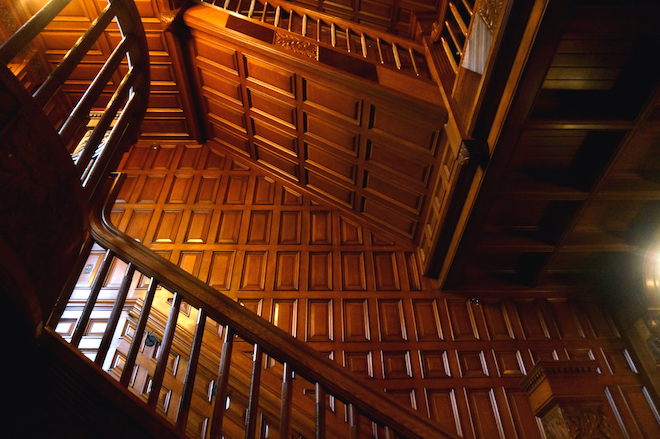 After the death of Alex, a costly dispute over his Will again divided the family, making Joan and her daughters against James. A lawsuit went all the way to the Judicial Committee of the Privy Council in London (in those days equivalent to the Supreme Court of Canada).

James, who was Premier of British Columbia was very much in the public eye. A story in the New York Times announced: “Premier sued by his Mother”. Joan and James did not speak for years. When she died in 1908 having lived in Craigdarroch for 18 years, the local newspaper reported that James (then serving as Lieutenant-Governor of British Columbia) was not expected to attend her funeral. At the last minute he changed his mind. During the service, he broke down and wept.

Not just a castle

If you read the above story, you may have seen what a complicated family history this castle went through and it kind of explains the creepy feeling we got out from touring the four floors. Josh and I both agreed that there are ghosts lurking around the castle.

I think it also has to do with the fact that since Joan’s death, the castle has been used as: Craigdarroch Military Hospital; Victoria College; offices for the Victoria School Board; the Victoria Conservatory of Music; and finally as the Craigdarroch Castle Historic House Museum. 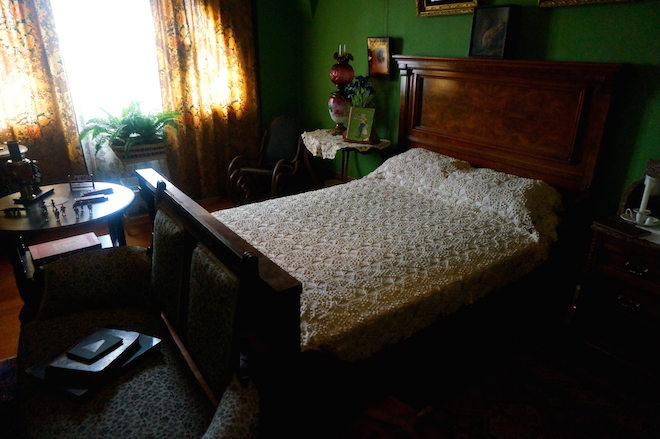 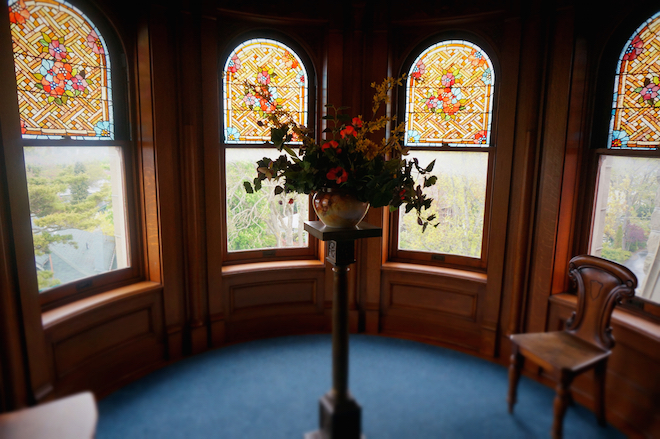 On average, a tour of all four floors of the castle takes about 45 minutes to an hour. Flash photography is allowed; but if you are like me, you hate using flash. Hence, why my photos are a bit dark.

It’s an easy climb up the 87 stairs, if you take your time to enjoy all the different rooms on each floor and then up to the Tower for a panoramic view of Victoria.

The Dance Hall has a few windows facing west with good views of downtown Victoria. 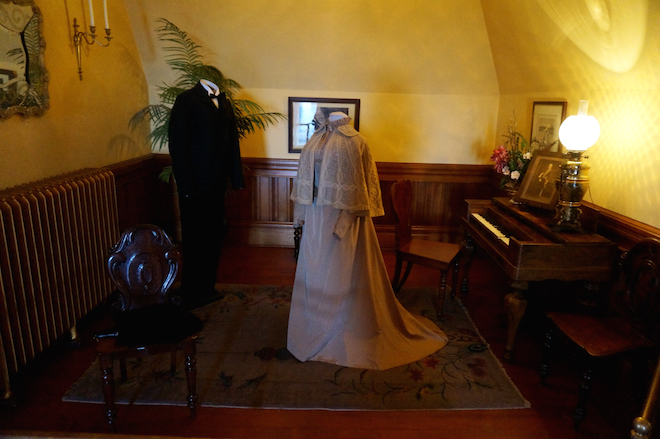 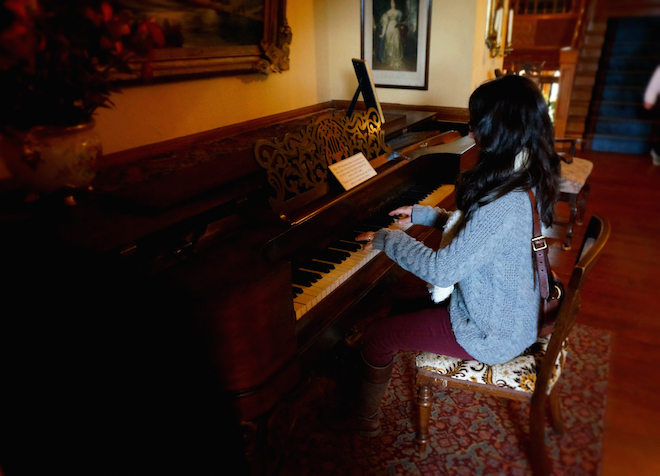 The 1879 Steinway piano may be played by visitors with musical ability. Unfortunately I have forgotten all that I learned. 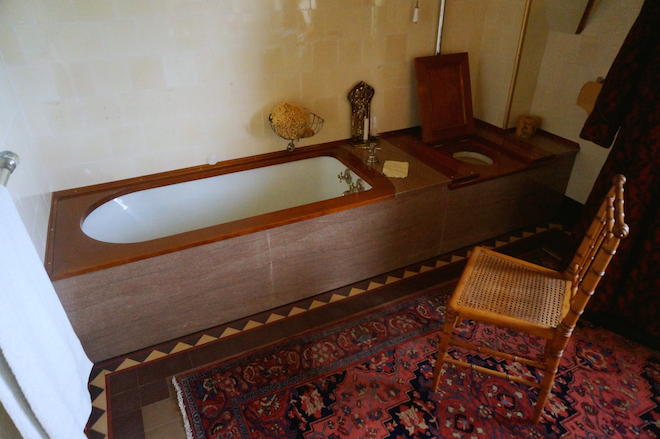 The original bathroom would have been for family use. The tiles are original but the woodwork has been recreated on historical trends. 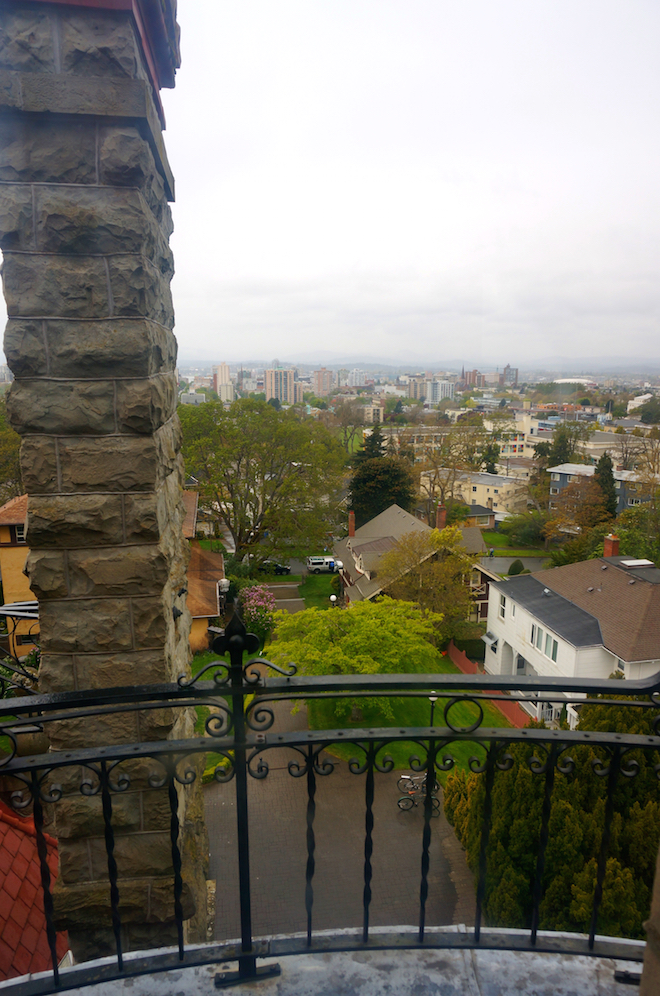 At the fourth floor, don’t forget to go a few extra steps to the tower to appreciate the panoramic views.

The breakfast room lined with cherry panelling was used by the Dunsmuirs for informal meals.

Have you ever been to a castle?

7 thoughts on “Craigdarroch Castle in Victoria, BC”