I love food, that’s a fact. But drinks can be pretty darn awesome too, especially if you’ve tried a few from across the world. I have tasted and enjoyed many different and wonderful liquid edibles that I will tell you about below. Some are hot, some are cold, some are sweet, some are savoury, some contain alcohol and some are non-alcoholic.

Please join in me in this world journey through drinks:

Chai in India is probably one of my favorite drinks, emphasizing “in India”. I don’t know why but I just don’t like western chai, I don’t know why it tastes so different. Chai in India simply means tea and it’s made with black tea, milk (delicious with buffalo milk), and sugar at its simplest form. Masala chai is when spices like cardamom, ginger, and cinnamon are added.

The chai in the picture was made for me by a very poor family who invited me into their home when I was outside taking photos of the neighborhood children playing. During my short time there, the doodhwala (milk man) came to deliver several jugs of fresh milk and they made my tea with it. Absolutely wonderful.

One of the things I miss about Mexico is all the delicious and commonly available aguas frescas, which literally translates to fresh waters. Aguas frescas are basically fresh fruit juice beverages often juiced on the spot. Mexico has an abundance of delicious fruits, so flavours include a large variety including mango, guava, tamarind, and more. Pictured is agua de guayaba (guava juice).

We all know that vineyards are abundant in Italy. The country is simply perfect for growing and making wine. Chianti is one of my all time favourites.

We now go back to India (top photo) and Mexico (bottom photo) where I had fresh coconut water from a coconut. In India almost at any market or by the side of the road you can find fruit stands selling young coconuts that may be cut open right there for you to enjoy right away. I am a big fan of everything coconut and though the water doesn’t taste like coconut, I still love its hydrating and replenishing properties.

By the beaches in Acapulco is where I usually get my fresh coconut in Mexico.

Reasons why I should live in Europe #lambic #lambicbeer #sunset

I absolutely adore lambic beer. I love the combination of the fruitiness and tartness that it provides.

Unlike conventional beers, which are fermented by carefully cultivated strains of brewer’s yeasts, lambic is produced by spontaneous fermentation: it is exposed to the wild yeasts and bacteria that are said to be native to the Zenne valley, in which Brussels lies. It is this unusual process which gives the beer its distinctive flavour: dry, vinous, and cidery, usually with a sour aftertaste. source

This blueberry Berliner weisse is taking me back to Berlin.

When I went to Berlin in 2008 and ordered a Berliner Weisse at the beer garden, I went to beer heaven. Berliner Weisse is a pale wheat, low alcohol and sour beer. It is often served with flavoured syrups like raspberry (Himbeersirup), or woodruff flavouring (Waldmeistersirup) to balance the sourness. I think I just realized based on this drink and the one above that I love sweet and sour combinations.

Just a few months ago I came across Berliner Weisse at a great drinking spot here in Oregon (pictured) and I was a happy girl.

I was in Santorini many years ago when I was a kid and one of the things that I still remember very well is drinking fresh orange juice at a restaurant overlooking the sea. This drink became memorable because it was so thirst quenching from the super hot temperatures I was experiencing. I also remember being shocked when my dad had gulped down his whole large glass of orange juice before the waiter even left the table! I couldn’t believe how fast he did that. I’m telling you, it was hot!

When I lived in Mexico I would always order a “limonada mineral” (sparkling water limeade) at restaurants. I love that you can find it at all restaurants and always fresh. You can also order it “natural” (with still water) instead of “mineral” and specify if you’d like it with or without sweetener or even separately to add to your own taste. It’s refreshing, thirst-quenching and delicious.

Vodka and Beer in Russia

While in Russia drink vodka at least once. It’s the national drink, even more so than plain water.

When I was there I bought tickets to a Russian folklore dance show and to my surprise, the ticket included a complimentary shot of vodka. How can you not enjoy a dance performance like that? I also tried Russian beer (Nevskoe pictured) and I remember it being pretty good.

Just like the chai, I dislike American-style hot chocolate. It’s too watery and sweet for my taste. I like my hot chocolate thick and dark, without whipped cream. And that is how I found it in London. Sooo good. In Europe in general you will find hot chocolate to be more like this.

Some of the best wine I’ve had has been local to the US actually. There are some really good wines here. From California to Washington, the West Coast has got it. 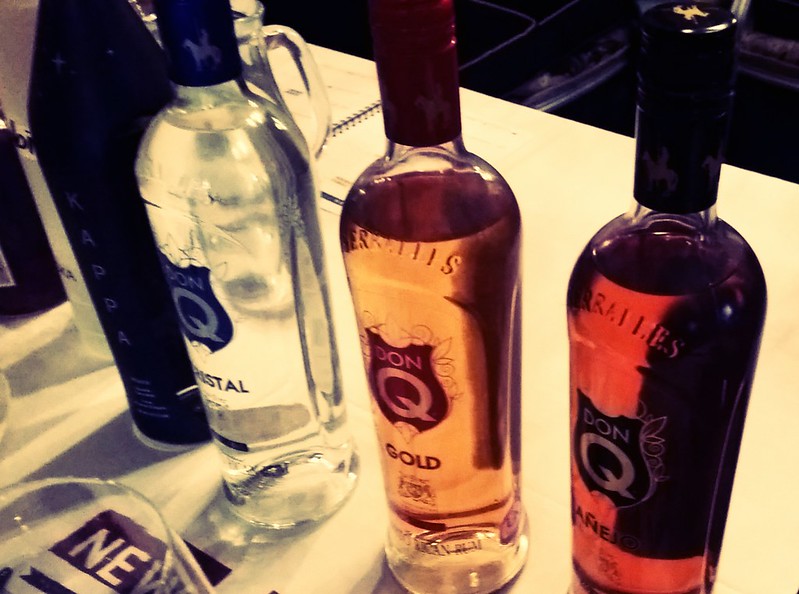 Several years ago my whole family including extended family flew to San Juan, Puerto Rico for my grandmother’s funeral because that is where my grandfather was buried before I was born, and they were to be buried side by side.

This might sound bad but I had a lot of fun in that trip. I got to spend time with my cousins whom I don’t see very often and we all went out and had lots of fun. One particular drink I remember was Don Q rum which is made in Puerto Rico. I remember my older brother and cousin saying (more like yelling or singing) “Don Q” all night.

I think my grandparents would’ve been happy to see all the cousins enjoying each other so much.

Tea in BC, Canada

The Fairmont Empress Hotel in Victoria has some really fancy tea time going on. You even get a box of complimentary tea to go and I gotta say I wanted more when I ran out. It was definitely good, and so where the pastries and sandwiches.

Only in Portland can you have an espresso like this at a laundromat. #pdx #portland #portlandnw #espresso #coffee @spinlaundry #oregon

Portland is very well know for its beer and its coffee. I have to admit I am more of a tea than a coffee person but I’ve had some really delicious coffee around this city, from cappuccinos, to macchiatos, cold brew, and espresso.

Ginger Ale in the Skies

Besides water, ginger ale is my favourite choice to drink while flying across countries. What is your favourite?

20 thoughts on “Drinking My Way Around The World”