Two months ago, we moved into a fixer-upper house in India.

Over a month ago, we got new windows for the bedroom.

About three weeks ago we ordered new windows for the rest of the house; they had to be custom made because the windows in this house were really old (and dirty), and all different sizes. We ordered clear glass so we get to see the outside. I don’t know why in the world, but homes here have blurry glass where you cannot see outside (I don’t know the technical word for this glass).

About a week ago we asked Shekhar about the status of the windows, and he said they would be ready soon. Because of previous experiences, I asked him to let us know before they bring them, and he responded “yeah I’ll call you one hour before.” (He said he would do this when they brought the A/C but he didn’t and they simply arrived when it suited them and without notice.) I told him: “no, not one hour before, you let us know when the windows are ready and we choose a day and time for them to bring them.”

The next day, on a Saturday, he came to tell me that the windows were coming on Monday at 4pm. Okay, I didn’t get to decide, but at least he let me know two days in advance. I did ask him to change the time to 5pm because of a conflict.

Monday came and we had set up the house for the workers to come install 12 different windows. Around 4:30pm we found out that they weren’t ready so they weren’t coming. It was a little frustrating mostly because we had moved the furniture around. Shekhar was yelling at them on the phone; we couldn’t understand one word, but he was really mad and he told us after hanging up that if they didn’t have them ready the next day, he would take our house lock and key and lock the window shop. Crazy. My response was: “but we need our lock and key.” (Yes, he was being serious.) And he said: “I’ll buy another one.” I didn’t want to argue so I let it slip but I was not happy. He seems to say that a lot: “I’ll buy one tomorrow…” “I’ll buy another one…” but he never actually does, like when he used our kitchen knife to cut some outdoor pipes.  I get frustrated just thinking about all these things. Anyway…

The next day we setup the house again for the windows to come and of course they did not. Apparently some machine they needed had broken. Shekhar did not lock the shop.

On Wednesday I was thinking that maybe the third time is the charm. (Is that how the saying goes? We have the same saying in Spanish but with different wording: “la tercera es la vencida”, which literally translates to: the third one is the expired one, or the third one is the victorious one). They said they would come around 7pm this time, and this time we didn’t move the furniture before they came. They did not come and instead of getting frustrated, we were like whatever.

On Thursday we didn’t even ask about the windows at all. We figured they’ll be ready when they are ready and they’ll just lie about it again.

On Friday (yesterday), they showed up around 5pm, unannounced of course, but at least it wasn’t at a crazy time or a bad time, but my attempt to know when they were coming was a failure and so far impossible in India. Nothing has been ready when expected, and when it’s ready they just show up. It took them about two hours to install the windows, and there was a lot of drilling and hammering, so we had a cup of tea outside and then left for a ride on the scooter (while Shekhar stayed and supervised.)

Even though the workers left a big mess behind which we cleaned when they were gone, and they didn’t bring the shower and toilet windows (they said tomorrow… and obviously that didn’t happen), we were both really happy about the new windows. We now get to see our neighbor the cow, and we will have a lot less uninvited bugs because we don’t have holes in our windows anymore, and because of the same reason, the house will be quieter too. So yay!

We still have the old windows behind the new windows. The bars help for security, and the “blurry glass” will keep our privacy until we get curtains. 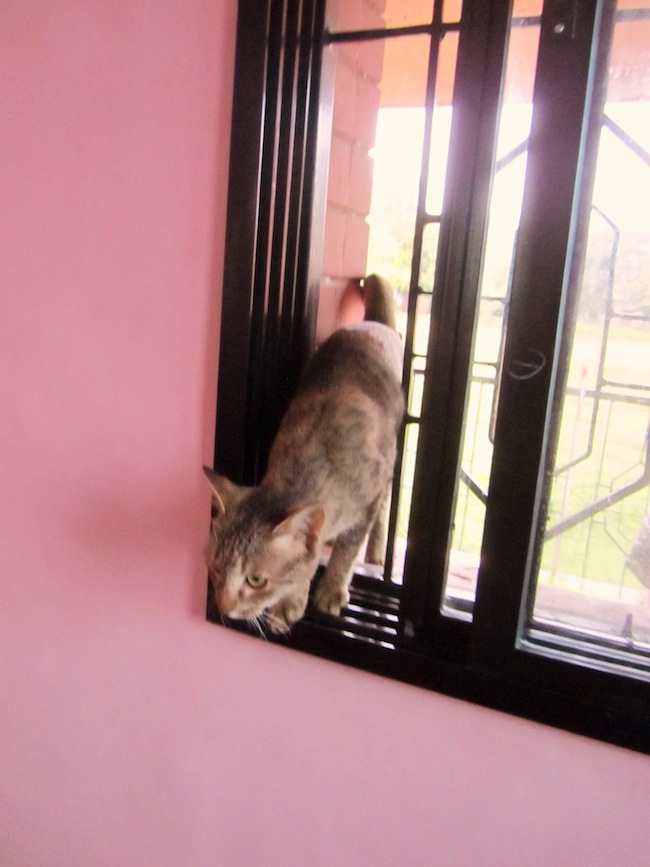