I was thinking this morning while I was eating my breakfast at the dining table by myself. A scrambled egg with salsa verde, avocado, one tortilla, and a side of a gluten-free frozen waffle (actually toasted not frozen) half with butter and half with almond butter and honey. That’s how weird I am but that is not the topic of this post. I was thinking about goodbyes. And I came to the realization that I suck at goodbyes.

I was thinking about the fact that we’re moving again… darn, I was planning on making a post for breaking the news, but now I’ve said it. But I won’t tell you the details yet; I will write a post about it later, in a week or two when we’ve settled down.

For two weeks now, I haven’t been going to my CrossFit gym and I’ll never go back again, at least not here in Utah. I went there several days a week for almost 6 months and met a lot of cool people. People here are so nice. I decided I’d write to the owner/coach to tell her about the move only after I’m gone. So, I’m basically disappearing on them. It was only 6 months, so I’m sure they won’t care that I’m gone. But it got me thinking about my goodbye patterns and how bad I am at them.

Nobody likes goodbyes. But people are way better at them than me, I think. They scare me so I avoid them. This has often put me in an extremely selfish place. In 2009 when I left my hometown (Mexico City) to leave to the US to “follow my heart”, I basically bought a ticket the night before I was leaving, and only told my mom about it until she questioned me what was going on because she has psychic abilities and could tell something was going on. I never found the strength, the guts, to go to her room and tell her what was going on so she came to me and basically forced it out of me. I broke her heart.

When I look back on my 27 years of life, that is the one thing I wish I would’ve done differently. I still feel bad about it. I wish I had fought my fears of breaking the news and goodbyes, and be less selfish. The thing is, I just freeze up and almost become numb, a weird automatic emotion self-defense mechanism my brain apparently has. And when this happens to me, compassion and consideration become nil. Scary stuff.

My dad found out the next morning that I was leaving in a few hours.

My best friends found out about two days after I was gone, that I had left.

I told you I suck at goodbyes. 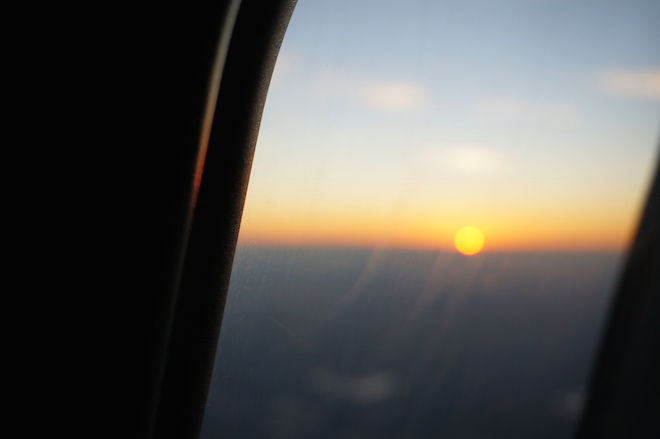 When we moved from Oregon, after being there for two years and sharing the same walls with two people, we let them know we were leaving one week before we left, and seven days and a hug later we were gone. Poof, just like that.

I was also going to CrossFit there, for at least a year. I didn’t tell anyone I was leaving except for the coach. Some friends I made found out through Facebook after I was gone.

I am 99% sure the people in Oregon didn’t really mind I left, and if they did, they got over it really fast. They don’t miss me, I’m sure.

Goodbyes absolutely scare the sh*t out of me. I hate them and avoid them.

I haven’t built any strong relationships in 7 years, which I’m also pretty bad at. It’s so hard for me to open up to people, it takes me a long time to feel comfortable with people, so I naturally keep my distance especially since we do move so much. It’s not worth pursuing a close relationship, cause we’d end up leaving again and you know, goodbyes suck.

Luckily, I still have five really close friends I’ve known for over 15 years now, whom in spite of time and distance, I can still count on. They’ve put up with my craziness, my weirdness, my lack of goodbyes, my millions of moves, my lack of communication, and I still have their love, friendship, and support. I’m so grateful.

But it wasn’t until today when I was eating a toasted frozen waffle that I realized how terribly bad I am at goodbyes, how much they terrify me, and how much I avoid them. Which is totally fine as long as I don’t hurt others. The problem is when I do hurt others out of my fear and weakness.

The first step is to realize and admit the problem, right? But what now? I don’t know what to do with this new realization. I’m still going to leave this town without saying goodbye to anybody so…

Are you better at goodbyes? Do you have any tips? Should I try to be better at them?

16 thoughts on “I Suck At Goodbyes… Like, REALLY Suck At Them”