It’s been four weeks now since I announced my pregnancy at 28 weeks. So, four weeks later, here’s a pregnancy update, including the same fun questionnaire as last time. 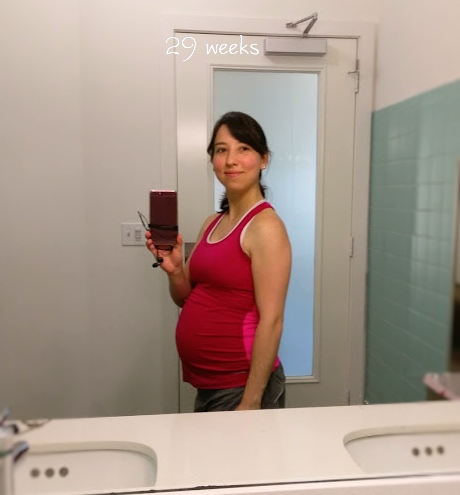 Since my last 28-week update, I’ve seen my OB doctor twice. I saw him in week 29 for the first time in 8 weeks and confirmed that my weight gain concern was legitimate and not a crazy pregnant woman worry. Normal target gain by then is 14 pounds, and I had only gained 9-10. But, he wasn’t too concerned. He said I measured fine, whatever that means, and the baby’s heart rate was perfect, as well as her activity.

He asked me if I was on a diet, and while I do try to eat healthily, I’ve never been on a diet in my life. I’ve also actually been trying to eat more because I was worried I wasn’t gaining enough weight based on everything I’ve been reading, including three books and online articles.

It’d be SO easy for me stuff myself with cookies and cake and croissants between meals and gain weight, in fact, I’ve been craving and abstaining from desserts big time… but gaining weight without good nutrition is not the way to go. But I do indulge a bit in the weekends by going to my favourite bakery.

I ain’t spending on fancy pregnancy photoshoots, so all I’ve got are these crappy bathroom weekly selfies.

At 31 weeks I had a growth scan ultrasound, lab tests to check for gestational diabetes and anemia, and a visit with the OB doc all in one day.

Ready for a sugar high. Gotta take this orange drink with 50g of dextrose for a glucose tolerance lab test. I wish I could take a Starbucks frappuccino instead :p. #austin #atx #labtest #orange #glucose #sugar #sugarhigh

The lab tests came back normal. But on the growth scan, everything seemed fine except her femur (leg bone) apparently is measuring too small. And apparently, this is not a big concern but enough for the doctor to send me a referral to a fetal medicine clinic to get a more accurate scan.

The doctor and the nurse kept telling me there is nothing to be worried about. I wasn’t worried, but when they keep telling you not to worry you start to wonder if you should be! And then, of course I went home to google about it and I saw that moms in many forums wrote about the same concern and they all sounded pretty freaked out, so I guess moms do worry about it.

It could mean a few problems, but frankly I am not worried at all. Although I am not sure if the doctor was downplaying the concern.

The concern is that everything else measured fine (head, abdomen, etc), but the long bone, the femur, measured too small. We’ll see how what the doctor says after the next scan.

Have you seen me? I’m tiny, 5’1″ tall,  and I was born pretty tiny too. I expected her to be born pretty small but then catch up to her dad’s genes, which are taller. Or maybe she’ll always be petite and have to roll up all her pants, like me, ’cause taking them to the tailor is too much a hassle.

Baby is a little human now with all 5 senses functioning, more pronounced wake/sleep cycles, and more brain activity. At the 31 week ultrasound we even saw her blinking! She was also practicing her breathing, according to the ultrasound technician.

Baby is the size of a:

Large jicama, or a Napa cabbage, or a spaghetti squash, or a half gallon of milk, or about 16.7 inches long. Where do they get these comparisons?? Although my baby girl is probably a bit smaller than the “average”.

Since week 29 I started feeling a significant uptake in activity. It actually became a little creepy. I could see her move on my belly, and felt her limbs moving around. It’s weird and fun. Now at week 32, it’s a little less crazy as she’s in more cramped quarters. 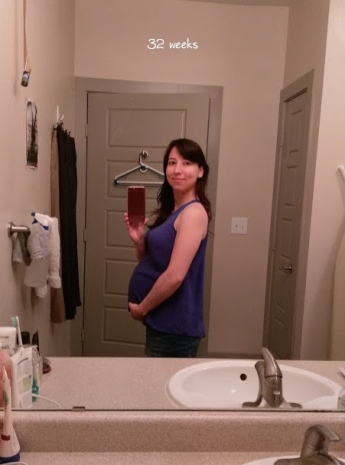 Still haven’t purchased any maternity clothes apart from the 1 pair of shorts and 1 dress I bought around week 20. But I have been wearing those maternity jean shorts more often, as well as a super comfy Aerie (non-maternity) dress I bought a few months ago (pictured at 31 weeks). At home, I still live wearing my Target cami tanks I mentioned on the last post.

For a couple weeks I really craved dessert. Cookies, donuts, cheesecake, brownies, churros… But mainly because I’ve been depriving myself of such things. Then, I started craving cheeseburgers big time and melty cheese in general, like on grilled cheese or hence, a cheeseburger.

I significantly decreased my exercise routine. Through pregnancy, I wanted to stay moderately fit, but I started feeling like I should take it easy given the weight concern and now baby is not growing enough apparently. I need to keep giving her all the nutrients, not burning them. So I don’t go to the gym to do weights anymore, and my outside walks also decreased because it got way too hot! So, now I do occasional short walks, and some body weight exercises and stretches at home.

Another reason I can’t exercise much is because of pelvic pain which I’ve had since the first trimester.

About once a week a get one or two days of strong sleepiness/tiredness. These often come with hunger and moodiness. I’m pretty certain these are caused by baby’s growth spurts.

I’m also definitely feeling a bit short of breath, with my lungs being squished and all.

Pelvic pain and some sciatica continues.

My eyesight has definitely gotten worse, things seem a lot blurrier without my glasses. Which apparently is common in pregnancy due to fluid retention, hormones, and blood circulation, and should go back to where it was after birth.

Also, had a couple more middle of the night intense leg cramps that I failed to keep to myself.

And since about a week ago I started having almost daily lower back pain, especially after standing for a while.

Varies. Some good nights some bad nights. Some crazy dreams. The time I wake up is also varying ranging between a 2-hour window.

I purchased a few baby clothes we needed and we received a stroller & car seat from the baby registry :D. But we’re still not prepared for her arrival, including sleeping arrangements.

Still pretty excited to meet her and I think less anxious about it. We finally got insurance from his employer this month.

I’m still quite nervous about the whole sleep deprivation for several weeks thing that happens when you have a newborn and you’re planning to breastfeed. And given that I cook three meals a day at least 5 days a week, I don’t know how in the world I’ll have time or energy for that and how it’s all gonna work out. And I don’t know how I won’t become a grumpopotamus and an emotional mess because of exhaustion and hunger. I hope not.

Totally unrelated: cooler weather. Also being able to exercise, mostly because it really helps my mood.

While yes, I’ve had bursts of sleepiness and moodiness, and some physical pain and discomfort, I feel like this pregnancy thing has been relatively easy for me. I said these words to Josh the other day: “I’m either super chill, or I’m having a great pregnancy. Or both.”

I get a daily digest from What To Expect of the August Babies 2017 message group activity of expectant moms having conversations and voicing concerns of all kinds, and every time I go through it, I think: man, these women are having a much rougher time than me. So, whether I am super chill, or my body is responding to pregnancy really well, I’m grateful.

And that’s my pregnancy update!