I was born and raised in Mexico City; I moved out for the first time to London when I was 19 years old. So, until I am 38 years old, Mexico City will be the place where I have spent the most time, and possibly be the only place ever I live in for that many years. Even though I loved Mexico, I still had the bug to move abroad but I always missed many things (and definitely didn’t miss a few like traffic and pollution.)

Last time I visited was almost exactly a year ago.

This time, I was there for a week, and I already felt a bit like a tourist. I was seeing things with fresh eyes, and since Mexico City is a rapid growing city (I really don’t know how they fit everything), I was seeing many buildings and places I had never seen before.

This visit was the most different of all of my visits since I moved out. It was the time with the most changes. For example, my younger brother was not living there anymore (temporarily). Last summer, he moved to Canada for a year of boarding school. On the other hand, my older brother had been living in the US since he started college about 9 years ago, and now was living back in Mexico but in his own apartment in a hip area of Mexico City, not very close to our original home. So it was weird that for the first time, we were both in Mexico but sleeping in different homes.

Last but definitely not least, I received a surprise upon arrival. My trip to Mexico was quite spontaneous, the decision was made about a week before departure and my flight ticket was purchased three days before my departure, so when I arrived to my old home, my mom was clearly not ready for my visit. As we entered the apartment she said: “leave your suitcase here, I remodeled your room” and I followed her as she walked towards my room, opened the door and showed me that my room was not livable.

You can’t see very well in the picture, but the whole carpet had been removed because the dog had peed all over it, and my mom was planning on replacing it with hardwood floors which you can see in boxes on the right. The idea sounded awesome because hardwood floors are awesome but the timing wasn’t so awesome. And where did the bed go? I have no idea. So I had to stay in my younger brother’s room which had no bathroom because his room, before he was born, used to be a TV room, and my older brother’s room was being used by my uncle’s ex-wife and her two young daughters, my cousins, because they were in Mexico City for a week getting their US employment visas, going back the next day. 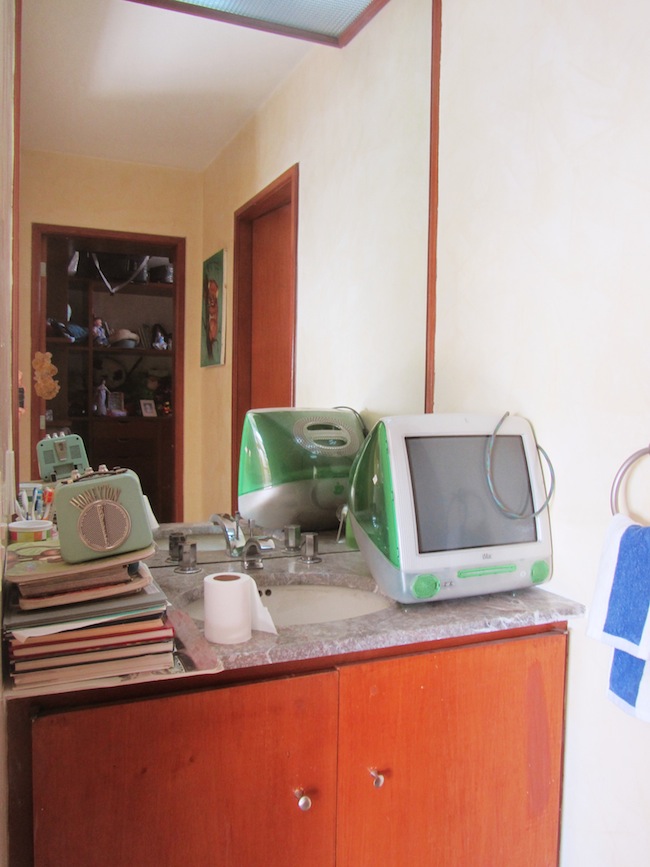 I walked further in, turned left and found my super old iMac on the sink, of all places. At least it had toilet paper.

The upside: I was going to have good internet in my brother’s room. For some reason the internet signal was always weak in my room.

I wasn’t as shocked from seeing my old sanctuary in such state as I should’ve been. Maybe it’s because of my practice in the last few years of trying to be detached from things. And it actually made me hang out with my mom more, because instead of hanging out in my room all the time like I am used to, I was hanging out with my mom in her room watching TV in the mornings while getting ready and evenings before bed.

During my 1 week stay in Mexico City, I had dinner with all five of my old best friends, which apparently only get together like that only when I come visit. In fact, two of them came to the conclusion that the last time they had seen each other living in the same city, was last year when I came to visit. They all decided that they were going to create a recurrent event to get together once every two months because once a month wasn’t going to be very realistic. All six of us have known each other for at least 13 years and it was a very lovely dinner.

I found out that I came in a super busy week for all of them, so we only got to see each other that one night.

I also went to the Historic Center with my mom, where the famous Zócalo is located.

Here are a few interesting facts about the Centro Histórico of Mexico City, courtesy of wikipedia:

The Zocalo is the largest plaza in Latin America. It can hold up to nearly 100,000 people.

Most of the historic buildings it contains were constructed between the 16th and 20th centuries.

And a bit of history:

This is where the Spaniards began to build what is now modern Mexico City in the 16th century on the ruins of the conquered Tenochtitlan, capital of the Aztec Empire. As the center of the ancient Aztec Empire and the seat of power for the Spanish colony of New Spain, the Centro Historico contains most of the city’s historic sites from both eras as well as a large number of museums. This has made it a World Heritage Site 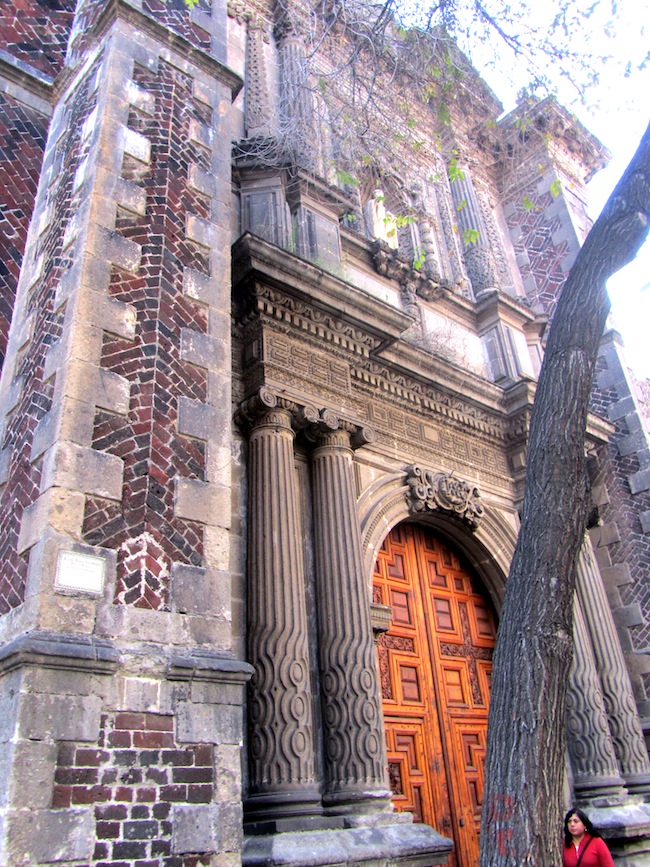 We needed to use the bathroom so we went inside the original Palacio de Hierro which opened in the 1850s and is now part of the upscale chain department stores in Mexico. I had never been inside this building, and I am glad we did because as we were going up the escalator, I luckily looked up, and saw an amazing glass mosaic roof.

We then headed to the main plaza. 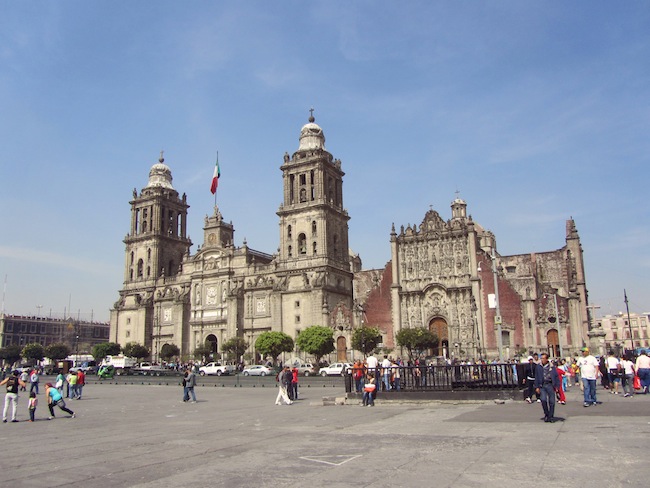 We went inside the Metropolitan Cathedral which was built in sections from 1573 to 1813.

I only took one quick picture inside, hence not a very good one. Even though photography without flash is allowed, I didn’t feel comfortable snapping away for some reason.

The picture was of one of the beautiful Altars, the Altar of Forgiveness which is seen as soon as you enter the Cathedral.

The Altar of Forgiveness was the work of Spanish architect Jerónimo Balbás, and represents the first use of the estípite column (an inverted triangle-shaped pilaster) in the Americas.

There are two stories about how the name of this altar came about. The first states that those condemned by the Spanish Inquisition were brought to the altar to ask for forgiveness in the next world before their execution. The second relates to painter Simon Pereyns, who despite being the author of many of the works of the cathedral, was accused of blasphemy. According to the story, while Pereyns was in jail, he painted such a beautiful image of the Virgin Mary that his crime was forgiven.

Inside the Cathedral there are sixteen chapels with altars dedicated to a different Saint. This doesn’t happen to me often, or ever, but as I approached the Chapel of Holy Angels and Archangels and peeked inside behind the protective bars, I got this sudden strong pain in my stomach. Where a stomach actually is, not where people usually point to where their belly is, but above that. At first, I thought it was a coincidental pain and related to something else, but as I walked away from this chapel and sat down on a pew, the pain was gone almost instantly and it never came back. It was a very strange pain too, so I eventually had no other reason but to link my pain to the Angels’ Chapel visit. 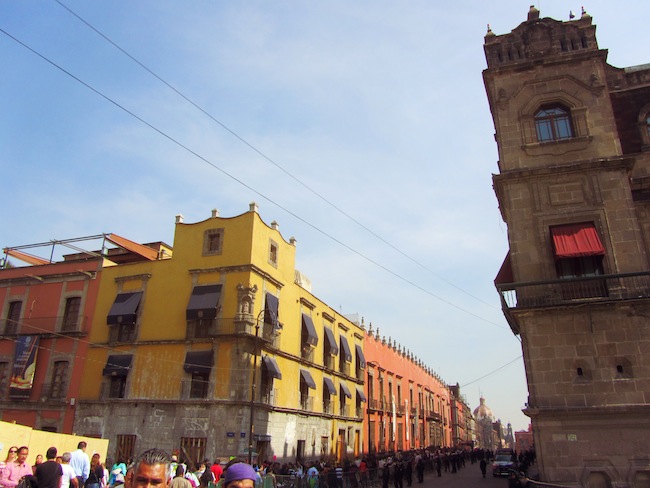 After all this intensity, we headed to the streets of shops and markets where there are rows and rows of small shops selling all kinds of things, and if you know where to look or how to look, you can find amazing things for really cheap. My mom likes to come here and she often gets asked about where she bought her clothes which she makes look expensive, but doesn’t always reveal her secret. I think she should have a blog about it.

I bought myself a few things including scarfs, tights, leggings, and sweaters all for great prices. At Centro in these shops they sell things at bulk prices but you can buy individual pieces. 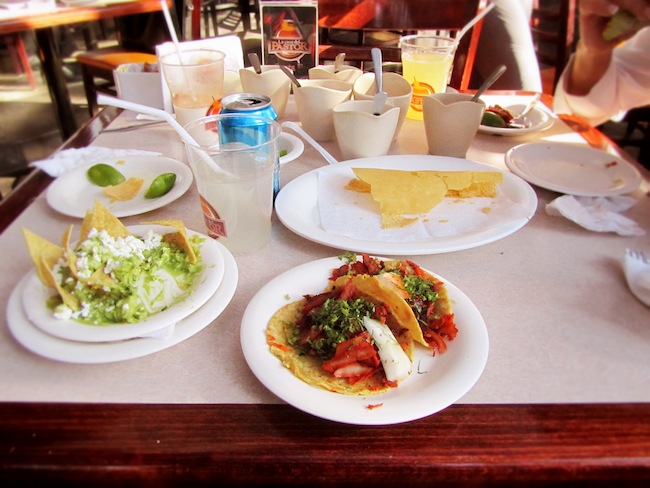 Of course I got my taco fix. Nowhere in the world have I yet found tacos al pastor like they have them in Mexico City. It was one of the highlights of my trip. And you see that guacamole in the picture? It was complimentary.

Another fix I got was of my favorite nuts in the world: Hot Nuts.

These Mexican peanuts are seriously delicious, they are spicy but not too hot, they’re tangy and crunchy, and I regret having bought just one packet during my whole trip and not packing any to bring back. That was a really dumb move. What was I thinking? I wasn’t.

Overall, it was a great trip.

P.S. I regretted not taking pictures of the Christmas tree my mom put up before I came, because she really does a great job. But my brother just posted this on instagram: